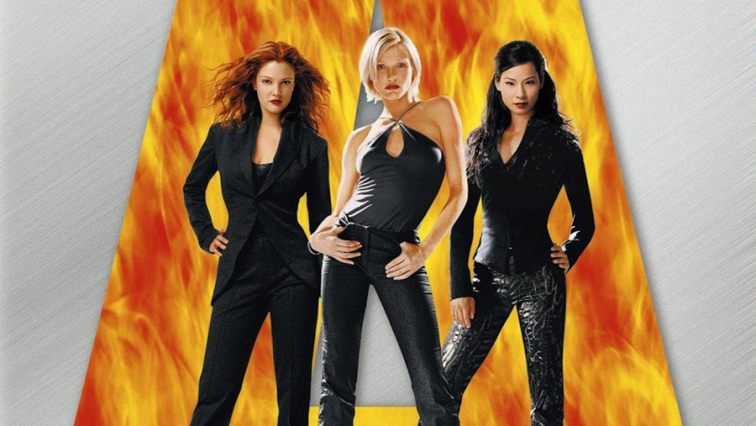 Remember John Forsythe informing us that “Once upon a time there were three beautiful girls …”? Does that mean Charlie's Angels was a fairy tale? It certainly had the female empowerment angle locked up, and this updated, big-screen version of the Seventies television jiggle-fest sticks to that formula like hot pants on Cameron Diaz. Fans of the series will get a charge out of seeing the original's T&A crime-fighting formula transposed to the big screen, and even detractors -- and there were many -- will be hard-pressed not to crack a grin watching Diaz, Liu, and Barrymore (who also produced) kick righteous butt and shake some splendid booty. Let's not mince words: The script, by Ryan Rowe, Ed Solomon, and John August, is as thin as a gauze thong, a barely-there framework on which are hung outlandish, often outright silly action set-pieces. There's wire-work à la The Matrix with the Angels high-kicking everything in sight (courtesy of Cheung-Yan Yuen, who, not surprisingly, headed the Matrix stunt team), explosions, guided missiles, CGI disguises, and plenty of rump-shaking bump 'n' grindage. Sure, deep down inside we may have a tiny, politically correct shouter telling us that this is popcorn trash, yet another symptom of the ongoing “dumbing down” of America, but the fact remains that McG, in his feature debut no less, has created a simply flat-out fun film. It's obvious from the start that this triumvirate of Hollywood sex bombs are having a blast as they essay these wacky über-babes. Diaz in particular seems to be cresting on a tide of nitrous oxide: Her character Natalie is the Farrah of the group, a bubble-headed sprite who just wants to find a decent guy, do the robot, and, you know, have fun. Liu's Alex (the brainy one) juggles boyfriend LeBlanc and a nasty pout, and Barrymore's Dylan heads up the team and makes bad relationship decisions such as leaving real-life paramour Green (in a cameo) in favor of the fabled Wrong Man. What's a girl to do? Why, kick ass, of course, and this the film has in glorious, Powerpuff Girl spades. McG, whose previous work includes a brace of MTV videos and commercial work, puts his rapid-fire editing skills and deeply ironic sense of humor to work overtime, and amazingly, it all hangs together in a lightweight, sexy confection. The meager plot has the girls investigating the kidnapping of computer millionaire Eric Knox (Rockwell, well-cast and milking his role for all it's worth), battling a howlingly surreal Glover, and saving the world one more time (not that we expected anything less). Lynch, Curry, and Wilson fill out some minor roles that go nowhere, but my biggest complaint with the film is Murray's woefully underwritten role as Bosley, the Angels' droll aide-de-camp. While the girls seem to be having all the fun, poor Bosley is relegated to what is essentially a minor role. I suspect this is due in no small part to his measurements, or lack thereof, but surely the comic's jowly wit could have been better used. Ultimately, however, it's a girly show (in the best sense of the term), and McG wastes no time in getting them out of their skimpy costumes and into even skimpier ones as they zip across the screen in stiletto heels while executing perfect martial-arts moves. If the plot is somewhat muddled in the translation, that's likely the price we have to pay for this wiggy date with not one, but three angels.