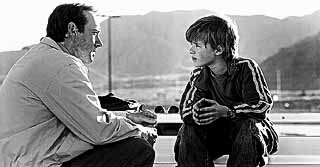 The fact that Pay It Forward is already generating some Oscar buzz from pre-screening film critics only serves to point out what a disastrous year it's been in terms of award-worthy productions. And while this schmaltzy melodrama will certainly tug a few heartstrings as it snakes its way through the cineplexes of Anymall, USA, it is, at its core, a very manipulative piece of work, so much so that you may find yourself wanting to giftwrap your fist and pay that sucker forward to the man (or in this case, woman) behind the proverbial curtain. Leder, taking a breather from the action genre (she directed Deep Impact and The Peacemaker), directs with an iron hand; there is precious little subtlety in this film, and what there is seems to have been tacked on after the fact. The plot, which concerns seventh-grader Osment's noble idea to create what is, in essence, a feel-good pyramid scheme in which he performs three favors for three other people, they each do three more, and so on, ad nauseam, is interesting. Osment's original idea is sparked by his new social studies teacher Mr. Simonet (Spacey), a stern, distant resource with scar tissue on his face and revolution on his mind. Add to this already combustible mix Hunt as Osment's alcoholic, waitress mom, and you've got a whole lot of Oscar winners and nominees wrapped up in what is one of the most cloyingly PC films ever created. You can't entirely fault Leder -- the film is based on Catherine Ryan Hyde's novel of the same name and so much of the problem arises there -- what may seem inspirational and generous on the printed page can often get lost in the translation to screen. With Pay It Forward, the platitudes just keep on coming, a veritable tsunami of good vibes, until you look around and wonder where Bill Bennett is. Spacey, an actor with a knack for being simultaneously mercurial and reptilian, does not disappoint. His scarred visage and monotonous delivery belie an inherent distrust of the world at large, and his emotional baggage rivals that of Hunt, who also turns in a stellar performance. With her permed, blond tresses and clingy pseudo-white-trash outfits, she has the Vegas cocktail hostess thing down like nobody's business. And Osment, for his part, does what he can with a role that seems like it could just as easily been filled by the kid from the Life cereal ads. He has a way of scrunching up his eyes when he's out riding his bike around that makes me think he's destined for Clint Eastwood's crow's feet by the time he's 20. It'd suit him, though. He has enormous potential, and not just in the kid leagues. Still, Leder's leaden direction and the hot-'n'-cold running emotions throughout the film leave you wondering if it wouldn't have been easier for everyone involved to have just gone out and bought the bumper sticker instead: “Practice random acts of kindness and decent filmmaking.” Hey, I'll buy it, and I bet you would, too. 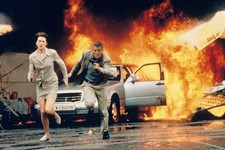 This maiden theatrical effort from DreamWorks Pictures – the film company formed some while back by Steven Spielberg, Jeffrey Katzenberg, and David Geffen – ...