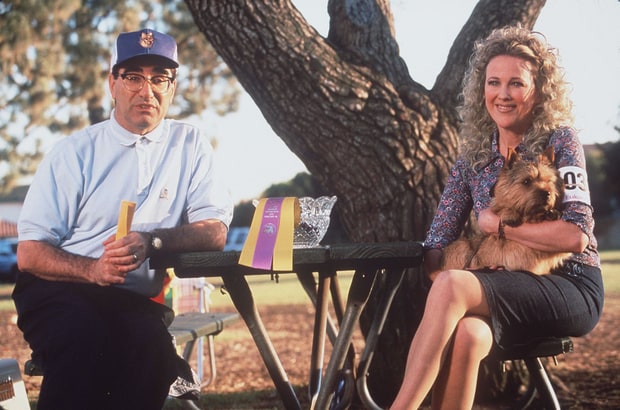 It's fitting that satirist Christopher Guest (Waiting for Guffman) should release this potent, sublimely ridiculous film now. This Is Spinal Tap, the unrivaled template for faux documentaries everywhere, and a film in which Guest co-starred (as Nigel Tufnel), is enjoying a re-release at the moment, and it's amazing how well this much more streamlined film holds up to Rob Reiner's rock & roll fiasco. Guest has had plenty of time in the interim to hone his lampooning skills, and this film, utilizing much of the same ensemble cast as Guffman, is a sleek, purring (barking, actually), comic machine. The bizarre, insular world of professional dog shows is the intended satirical target here, and Guest and company make the most of the public's less-than-adequate knowledge of the situation. We've all seen the Westminster Kennel Club affairs on PBS, or A&E, and so we have expectations about these events going in, but Guest flips them on their wagglely ear; the result is explosive belly laughs. There's Levy and O'Hara as the husband-and-wife owners of a Norwich Terrier. The running gag here is that the wife has apparently slept with every other male in the universe prior to teaming with hubby Levy, and they keep running into old flames in the unlikeliest of places. (Larry Miller has a terrific cameo as a testosterone-addled ex-paramour.) Higgins and McKean, as an a unambiguously gay, middle-aged duo parading themselves and their Shih Tzu are riotous, as are Posey and Hitchcock as the yuppified couple behind an equally neurotic Weimaraner. And then, of course, there's Guest himself, as a Southern-fried bloodhound owner given to babytalk in front of the dawg. The cast is remarkably on-target here, even more so than in Guffman, which, for all its strenuous aping of small-town vanities, was a much less cohesive film than this. Best in Show is all of a piece; it hangs together like some hilariously filigreed mobile, each role interacting with the others perfectly. The thing about Guest's film(s), the really splendid thing, the key aspect, is that unlike so many other satires and “mockumentaries” (the recent beauty-pageant travesty Drop Dead Gorgeous scuttles to mind), his intent is never cruel. Certainly Best in Show portrays the canine-fetishizing cognoscenti as an odd, rare breed, but the film never takes the low road when it can rise above. You get the feeling that Guest, during his, no doubt, thorough researching into the subject, fell in love with these campy, unique dog lovers. And, however funny, the results are never mean-spirited. You fall in love, or at the very least like, with them too. 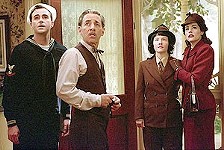 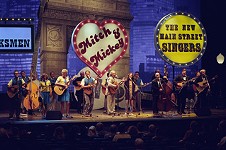