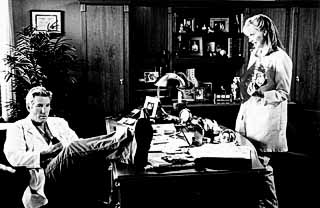 The mere presence of a new Robert Altman film in the theatres will be enough to draw in the regular connoisseurs of maverick film art. The idea of Richard Gere as a Dallas gynecologist whose job it is to stick his face between women's legs all day long will be enough to lure in untold others. Few, however, will leave the theatre satisfied as Dr. T & the Women will have little enduring significance in the Altman canon and legend, and the fantasy about what goes on behind the closed doors of a busy gynecologist's examination room quickly gives way to a deafening reality of the commotion caused by a waiting room full of dizzy Dallas dames. Gere turns in some of his finest work here as a man whose reverence for women knows no bounds -- in fact, this quality is the major source of his problems. With a wife (Fawcett) he adores and two grown daughters (Hudson and Reid), Dr. T's household is all women, and his office overflows with the society matrons who flock to his office for his genuinely compassionate care. His dipsomaniac sister-in-law (Dern) and her three little girls have also taken up residence in his home, his professional cheerleader daughter (Hudson) is planning the details of her upcoming wedding, and there's also the intriguingly self-assured new golf pro at the country club (Hunt) who gets under Dr. T's skin and the office manager (Long, who does her funniest work in years in this thankless role) who's more than a little smitten with her boss. That there resides a problem beneath the perfect exterior of Dr. T's life becomes obvious to all when his wife strips naked to romp in an indoor shopping mall fountain, supposedly reverting to childhood but looking more like Anita Ekberg famously splashing in the Trevi Fountain. The psychiatrists diagnose her as suffering from the sort of ailment that could only exist in the movies -- a Hestia complex, in which women who are loved too much and have everything they want revert to childhood. Yeah, right. Dr. T is thus caught in a uniquely modern male dilemma: damned if he does and damned if he doesn't. What do these women want? Other than the fact that they dress to the nines everywhere they go and that they are all blondes, we learn very little about what makes these society gals tick. Altman and his screenwriter Anne Rapp (who also penned Altman's previous film Cookie's Fortune) seem willing to allow the film's many women to serve as mere comic foils to Dr. T's kind but bewildered ministrations. The comedy is often harsh and cruel, as well. It all leads to a concluding maelstrom that stops short of raining down frogs -- but just barely. Dr. T & the Women shows signs of Altman's inimitable touch with its ensemble cast and overlapping dialogue and such. More than anything, it most resembles his 1978 film A Wedding, but like that misguided affair, you might be better off misplacing your invitation.