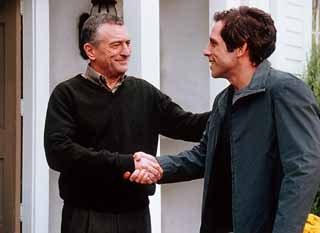 When it is good, it is very, very good -- and funny. But when it is not, Meet the Parents just feels like one long joke played out in every permutation possible. Everyone's nightmare -- meeting their would-be future in-laws -- is the sole comic premise of this occasionally side-splitting comedy. However, the one-note joke often wears thin and you can see the punchline of certain sequence setups well before their eventual delivery. The movie's first half seems to get most of the biggest laughs, perhaps because the movie's one basic joke is still new and fresh. By the second half, although the crowd is still laughing, the volume of the group response is noticeably diminished. Meet the Parents' makers are real pros in the joke-building department. Certain sequences remind the viewer of the way the deadpan gags were deliciously drawn out in that other recent Ben Stiller starrer, There's Something About Mary. Director Jay Roach helmed both Austin Powers movies, and co-writers Jim Herzfeld worked for It's Garry Shandling's Show, among others, and John Hamburg wrote and directed the grossly underappreciated comedy Safe Men. De Niro really seems to have taken a shine to comedy of late, and although the actor's intimidating presence and reputation seem to be just what the script called for, he is nevertheless the straight man to Stiller's deadpan antics. And there's something about the twinkle and smirk that always lurks behind De Niro's best scowls that interferes with his role as the comic foil. None of the characters are wholly believable, and Teri Polo's underwritten fiancée role suffers the worst. Also jarring is a subplot about the bride-to-be's brother that appears to be tacked on in order to add one further, and unnecessary, plot point. Additionally, Meet the Parents gets off to a rocky start with a disconcerting opening scene in which Stiller, as a male nurse, rehearses his wedding proposal while performing a medical procedure on a patient. However, the obligatory bathroom joke is a doozy, involving the explosion of an entire septic tank. Meet the Parents is ultimately passable movie entertainment, but like most future in-laws leaves a feeling of something still desired.