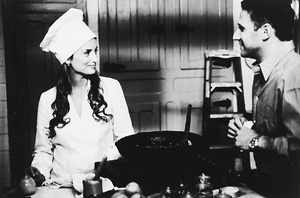 Speaking as one whose culinary skills have played a key role in many of the “entries” in my personal book o' love, I've always been favorably disposed toward films that explore the sensual harmonics between kitchen and boudoir. Hence the perhaps excessive slack I'm cutting for this frankly trivial, sweetly effervescent mouthful of cinematic Pop Rocks. Without really imitating the form of Like Water for Chocolate, or Eat Drink Man Woman, Venezuelan director Torres taps into the same juicy wellspring of erotic metaphor underlying the rituals of gustatory anticipation, preparation, and consumption. Not that Torres shows any particular interest in exploring these metaphors or making them the focus of her story. The main attraction here is obviously Cruz, one of Europe's hardest-working actresses who, unaccountably, is seldom seen in these parts. She's almost criminally endearing as Isabella Oliveira, a Brazilian cooking prodigy who dumps her unfaithful husband (Benício) and flees to San Francisco, where she becomes the star of a cooking show called Passion Food. More impressive than Cruz's hubba-hubba, Tecate Girl looks, though, is the artless assurance with which she rounds out a character who, as written, comes perilously close to being nothing but a walking mass of quirks. (The title refers to Isabella's insistence upon riding shotgun during sex. She's also an amateur voodoo practitioner and is cursed with extreme motion sickness that prevents her from using elevators or cabs.) Benício, a Mitchum-lidded knockoff of the young Antonio Banderas, is generically hunkish as Isabella's wayward swain, Toninho. Pursuing his ex's forgiveness with the stalkerlike persistence that somehow plays dreamy in romance movies but creepy in real life, his hot-blooded Latin stud is every inch a stock figure, as is Feuerstein's stiff yuppie TV producer who also pines for the luscious Isabella. Ditto Perrineau's sassy black drag queen, evidently thrown into the mix for the same local-color imperatives that cause fat redneck cops with mirrored sunshades to appear in all films set in the Deep South. None of Torres' whimsical -- and often quite beautiful -- magical-realist flourishes really manage to contribute much in the way of surprises or formal originality to Woman on Top's off-the-rack storyline. Yet thanks to this relentlessly likable film's playful sexuality and utter lack of pretension it's surprisingly easy to let all of one's objections float away on a fragrant cloud of kitchen sweat, pheromones, and sweet lime zest. Defiance
In this true story, Daniel Craig and Liev Schreiber play two Jewish brothers who escape into the forest to elude capture by the Nazis and wind up birthing a small village of escapees. 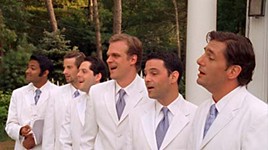 The Wedding Weekend
This earnest, well-acted ensemble film is a seriocomic meditation on what it means to be an American male approaching the dreaded four-oh.