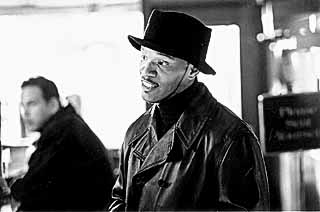 Bait begins by trading off between two scenes: Bristol (Hutchinson), a computer-savvy psychopath, tries to pull off a $42 million heist; and Foxx, as bumbling burglar Alvin Sanders, tries to “liberate” some shrimp from a warehouse. It's a maverick vs. a buffoon, really, but both men botch the job. Alvin is caught and carted off to jail, while Bristol's partner pulls a take-the-money-and-run. He hides the loot, then manages to get arrested on a DUI charge. Guess who his cellmate is? Yup, it's Alvin. The partner promptly dies, taking to the grave the whereabouts of the 42 million. Or did he? Bristol is convinced Alvin knows where the cash is, and the feds are convinced Alvin can lead them to Bristol, so what do you get when you put these things together? Alvin equals bait. Unbeknownst to Alvin, the feds implant a tracking device in his jaw, then set him loose on the streets in order to lure out their man. Sounds entertaining enough, and the film can brag a rising star in Foxx. However, Foxx can't say the same about the deadweight that is Bait. Foxx is the only bright spot in this muddle of a movie. He continually engages, handling both comedy and drama with an adept ease. But he's completely underused, not even emerging as the central figure until a third of the way through. Instead, we have Hutchinson (vaguely effeminate, in a typical Hollywood move to make homosexuality a trademark of its psychopaths) and the grim-faced David Morse as a Treasury Department agent who masterminds the (mis)use of Alvin. They're both bad guys, just on opposite sides of the law, and neither actor has the appeal to carry this film. Foxx does, but the script lets him down at every turn. The jokes are flat, the “sad” parts hackneyed, and the action achieves a new low in absurdity, with the obligatory ticking-bomb scene actually involving a runaway thoroughbred (Will Alvin and Mr. Ed get there in time? Could we care any less?) Furthermore, any attempts at character development are constantly distracted by director Antoine Fuqua's uneven pace. Fuqua (The Replacement Killers) jumps from unnervingly boisterous and bloody action sequences to forcedly flippant scenes of “light” comedy to moments of sheer melodrama. Nothing is the logical conclusion to the preceding action. The sum of these disparate parts? Bait equals bad.