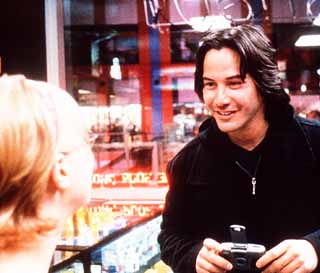 A lot of critical comparisons have been made between The Watcher and “the watcher vs. the watched” motif that permeated much of Hitchcock's work. Bad move. The Watcher doesn't warrant mention in the same paragraph as the master purveyor of knuckles taut white. The Watcher doesn't even deserve comparison to such modern serial killer masterworks as Silence of the Lambs or Se7en. But that said, this tale of a murderer and the FBI agent who tracks him isn't … all that bad. It's just another middling, generic entry in the serial-killer-of-the-week sweepstakes. This one never dazzles, although that doesn't have to be a bad thing. Mostly, The Watcher takes its time, soaking up James Spader's FBI agent's pill-popped, enervated face or lingering on killer Keanu Reeves' sadistic mating dance between piano wire and victim. Had director Joe Charbanic stuck with that pace, he might have produced a tense and cerebral piece -- assuming someone had handed him a script that didn't feel like a blueprint with little notes in the margin like “insert part here explaining killer's motivation” and then promptly forgot to do so. But even with a decent script, Charbanic still would have mucked it up with his constant showboating with the camera. And in case the weird angles and overexposed film weren't (irritatingly, needlessly) disorienting enough, why not throw in a screeching soundtrack and some jump cuts and split-second edits straight from the MTV school of zero-attention-span filmmaking? Yet The Watcher still manages to mildly entertain, mostly due to the efforts of its actors. They've all done vastly better work than this, but they put in just enough effort to make it interesting. Well, sorta interesting. Sporadically interesting. As the shrink called in to dissect the two men (each a watcher and a watched throughout), Marisa Tomei shows very promising hints of a gentle maturity -- less spunk, more subtlety. However, she's underused, as are the talents of Spader and Reeves (and yes, Reeves does have talent beyond Bill and Ted). If nothing else, The Watcher leaves me wanting to watch Tomei and company in something more worthy of their abilities.