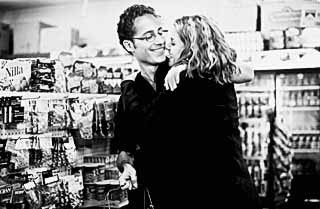 Whipped is very much a man's movie. Not just any man, but the frat boy, “lay-'em-and-leave-'em” type man whose vocabulary doesn't include big words like “emotional commitment.” In this case, we've got three such men, friends since college, who consider themselves to be masters in the art of scamming and who meet every Sunday to swap trade secrets and discuss the previous week's conquests. Things get a little trickier when they meet to mull over the woman each just met. Each guy thinks he may have found a woman whom he might actually like for longer than it takes to disrobe her. The problem? They all like the same girl -- the beguiling Mia (Peet). Mia can't choose which one she likes best, so all three date her and, in turn, become “whipped.” You'd think that the sight of these scammers-gone-soft hopelessly falling in love might also soften their unbelievably sexist views, but no such luck. They still display an embarrassing level of machismo and insist upon beginning and ending every sentence with a reference to their cock. Unbelievably, sex turns into a terrifically tedious business here. Granted, there are a few funny parts to this movie (my favorite involving a man, a vibrator, and Boy George's “Karma Chameleon”). But even at the funny stuff, I was consistently aghast at how unabashedly alpha-male, heartless, and chauvinistic this film is. It lets you in on all of men's dirty little secrets, their one-liners and power plays all for the sake of winning a blow job … and I don't want to know. I don't want to know that men like that exist. It would help if the performers were appealing enough to give their one-track minds an innocuous charm (see She's Gotta Have It's Mars Blackmon or the Swingers set), but they're not. The trio of rakes might be easy on the eyes, but they're hell on the stomach. Peet, who plays it brazen and ballsy, is intriguing enough, but we never really know her character. Her Mia is a mythic creature, given a different form in the imagination of each of these players. Only in the last reel do we get a hint of who Mia actually is. The “twist” is that she's just as much of a scammer as the men are. Is that supposed to be a happy ending? I've got a better one: How 'bout we lock all these assholes (and the man who conceived them) in a bunker in Siberia and promise to never, ever inflict them on moviegoers or singles bars again.