What if you went to bed one night as a 17-year-old girl and woke up the next day with morning wood and whiskers? That's the question posed by Equinox Knocks, which premiered at last year's Austin Gay and Lesbian International Film Festival and gets a limited theatrical release this week. After catching her quarterback boyfriend in the arms of another girl, a distraught Allie Black (James) boozes it up and drunkenly wishes she were a man. Maybe not the smartest thing to ask for in a Schlitz stupor, considering Allie's best friend is a witch and it's the autumnal equinox (when the universe is supposedly primed for all kinds of cosmic mayhem). Allie gets her wish and wakes up the next day trapped in an adolescent boy's body. Less than thrilled with her new packaging, she attempts a reversal but finds she's stuck as a boy for the next nine weeks. So Allie becomes “Caleb” (Adams), who turns out to have a killer arm. Soon Caleb's the new star quarterback … who sports red nail polish and stares an awful lot at the other boys in the locker room. Equinox Knocks was shot in Austin and Weimar, Texas, with an almost entirely Texan cast and crew. With that kind of lineage, you really want this little indie pic to win one for the team. Unfortunately, Equinox Knocks fumbles at every pass. Pitched as a gender-bender comedy, the laughs are few and far between. The mostly slapstick jokes rarely elicit more than a chuckle (and more likely a grimace). As far as the gender-bending goes, Allie's transformation into a male reiterates pretty much every sexual stereotype out there. As a female, she strutted around in camo and played a mean pick-up game. Then she goes boy, and suddenly s/he is mincing around and squealing about breaking a nail. And all that supernatural mumbo-jumbo is just plain corny. It's a damn shame, really, because the material is ripe for a ravaging of sexual assumptions and presumptions. Instead, all we're tossed is a woefully amateurish piece that sticks in the brain about as long as it takes a coat of that vamp-red polish to dry. 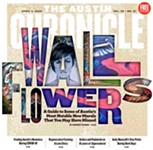 We Have an Issue: Austin Media Getting the Job Done
Local journos rise to the occasion, and band together for Friday’s All Together ATX fundraiser