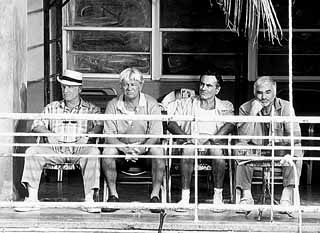 Galling as it must've been to get aced out in the Grizzled Former (Fill-in-the-Blanks) Regain Their Mojo sweepstakes, director Mike Dinner and company can't plausibly blame Space Cowboys for The Crew's weak opening. The real problem, I'm guessing, is much more basic. To wit: Most folks are just plain bored -- and I mean cross-eyed, wall-climbing, deep-down-to-the-molecular-level bored -- with this ubiquitous Endearing Wiseguys school of movie comedy. That said, until we develop the technology to travel back in time and cap Damon Runyan (thereby nipping the whole tiresome genre in the bud), the best we fans can do is to insist upon a modicum of creative effort in our huggable Hollywood hoodlums cinema. Is that too much to ask? Evidently so, judging by the embarrassment of big-time acting talent employed to no good end in this overplotted, emotionally hollow button-pusher of a comedy. As you've probably gleaned from the trailer, which basically spares you any need to see the movie itself, The Crew tells the story of four old-school Mafia musclemen running out their geriatric string as bickering roommates in a rathole Miami retirement hotel. Alarmed by their landlord's plan to convert their cheap digs to upscale condos, they hatch a plan. By faking a murder in the hotel lobby they'll scare off potential yuppie tenants with the threat of Mob violence. Unfortunately, the cadaver they use as their “victim” turns out to be the father of a Latin drug lord (an enjoyably maniacal Michael Sandoval) who quickly discovers and sets out to avenge their desecration of dear old padre's mortal remains. As is so often the case with these endlessly masticated Hollywood formula comedies, a few artifacts of bright, arresting original material occasionally pierce through the pervading haze. And even as predictable and oppressively overstructured as the story is, irrepressible talents such as Hedaya, Reynolds, Moss (The Matrix) and Piven (Very Bad Things) manage to make the best of their few chances to shine. It's pretty catch-as-can, though, in terms of really memorable moments. What could have improved matters, even within this boilerplate context? For starters, why not challenge the premise that these crusty old legbreakers need to be sentimental, caring softies at heart. Make Dreyfuss and Co. a bunch of unrepentant, unambivalently bad dudes who just happen to be old guys in seersucker shorts and Hawaiian shirts. Imbue them with some of the scary, scabrous, off-the-wall weirdness of novelist Carl Hiassen's fictional Florida mobsters. Create an interesting tension between charm and true reprehensibility in their nature. Would this make for a more successful film? Your guess is as good as mine. One thing's for sure though; unless Hollywood demonstrates some willingness to reinvent a bone-tired movie genre, the law of diminishing commercial and artistic returns is bound to kick in sooner rather than later.