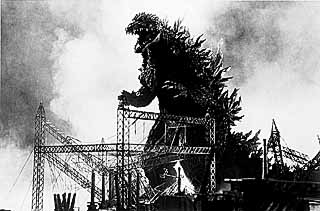 I've always seen Godzilla as something forcedly kitschy, a view, I'm told, that disregards the complicated history of Godzilla, a creature borne out of a nuclear-testing mishap and an allegory for a nation's attempt to reconcile its traumatized history. Godzilla 2000 (the 23rd entry in the Japanese series) takes a darker bent than recent versions, thick with man-versus-nature themes and musings on how the beast within may be awakened by the beast without. And it's no coincidence that the film's moralist hero repeatedly argues (to deaf ears) that, hey, maybe bombing the crap out of something isn't the answer. But disappointingly, that message is simply something the filmmakers cart out every once in a while when they need a break in the action. Mostly, the film's about watching a mutant monster breathe fire and chew up scenery. The makers have reverentially stuck by the principles of the first 22 installments and refused to computer generate Godzilla. That's right, he really is just a guy in a latex suit, which doesn't make for a terribly menacing baddie. Actually, he's kinda cute. Sometimes Godzilla gets a certain feisty glint in his eyes not unlike my cat Moe when she's thinking about pouncing (or leveling Tokyo, in Godzilla's case). Unfortunately, Godzilla gets shunted to the side in Godzilla 2000 to make room for his newest nemesis: a giant flying saucer, dormant in the sea for the previous 60 million years, that transmogrifies into Orga, a big nasty drooling thing that attempts to clone Godzilla in order to capitalize on his powers of regeneration. Huh? Throw into the mix a terrible dub (with lines that translate into gems like “Oh, bite me”) and what looks like, despite the film's high costs, really low production values. It's all pretty goofy, which I assume is the point, but it's also pretty dull. Some of the battle scenes stretch on for minutes at a time without any break for dialogue, and frankly, there's only so much one can take of two guys in latex plodding along, swiping at each other and screaming like banshees. After about the 70th time someone launched a missile at Godzilla's tough-as-nails hide, I launched into my own interminable squirm fest. I think it's those very qualities, the ones that make me squirm, that the cult of Godzilla loves: the cheesiness, the bad dub, the good lizard/bad lizard routine. Either you get it or you don't. And I guess I just don't get it.