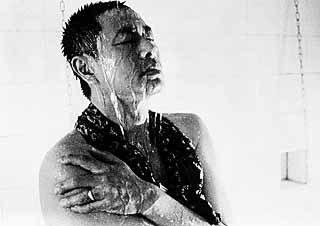 The shock of the new collides with centuries of meditative tradition in Zhang's simple, affecting tale of the final days of a Beijing bathhouse. Slated to be torn down to make way for urban renewal (“I heard they're building a high-rise,” says one patron. “Really?” says another, “I thought they were building a shopping mall.” Such is progress.), wizened Master Liu's (Zhu) communal, males-only bathhouse is part town hall, part gruff men's club, where locals, young and old, come to soak in warm waters, have the knots in their muscles beaten out, and pass the time drinking tea and sparring with caged crickets. The bathhouse is a link to a simpler time, before the “unpleasantness” in Tiananmen Square and the rise of Beijing's economic quarter, and Master Liu -- along with his mentally handicapped younger son Er Ming (Wu) -- tends it with a loving eye. Into this tiny oasis comes Da Ming (Pu), Master Liu's elder prodigal son, who appears out of the blue one day, wondering if his father has passed away after having received a mournful postcard from Er Ming. Da Ming represents in no uncertain terms the new, emerging China. In his dress slacks and white shirt, he's a mid-level businessman who's forsaken the old ways in favor of chasing the almighty dollar. Still, though father and son are clearly estranged, a hesitant twinkle lights up in each other's eyes at the reunion, strained though it may be. Over dinner that night, Master Liu tells Da Ming that the entire neighborhood has been slated for redevelopment; when Da Ming pursues the issue with his father, he's met with stony silence. The bathhouse is all the old man has ever known. Over the course of the next several days, Da Ming slowly sheds his city ways and falls into the old habits, helping to greet the bathhouse's assorted oddball customers as they straggle in. There's a pair of old men whose daily ritual includes battling crickets; a shy, overweight young man who can only practice his rendition of “O Sole Mio” while the water's running over his head; and the henpecked husband who comes in seeking advice for his failing marriage. To Da Ming's apparent wonder, his father's role is less that of bathhouse caretaker than all-around pop psychologist for his charges, and it's through the simple acceptance of that fact that the bond between father and son is reborn. Zhang's film is, again, a simple slice of nostalgia for a time that is rapidly fading away in mainland China, but the director, aided by an impeccable cast, manages to steer clear of the trite, rose-tinted pitfalls of the story and instead focuses on Da Ming's changing view of his father and brother. The film's opening scene -- in which Da Ming enters into a personal, fully automated “body wash” machine that resembles nothing so much as a tiny car wash -- sets the tone of Zhang's film, and everything that follows (including sepia-tinted flashbacks to a dryer time) moves from that confluence of old versus new. Shower is a deceptively simple film, though calling it simplistic misses the point entirely as the film mines several different levels in its take on an emerging China. Above all, it's a satisfying, almost restful work, as welcome in this less-than-thrilling cinematic summer as a cool soak on a hot summer's day. 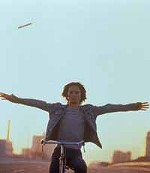 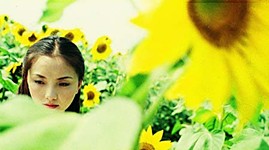