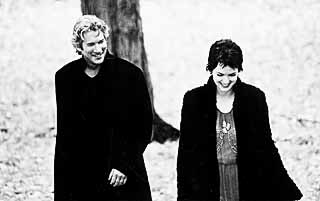 The lack of advance press screenings for Autumn in New York should constitute fair warning to all savvy movie fans. However, if MGM wanted to be socially responsible as well as pragmatic, all theatres showing this near-unwatchable romantic melodrama would be encircled by that yellow-and-black ribbon the Centers for Disease Control uses to cordon off areas infected by deadly biohazards. To say Joan Chen's May-December, great-looking but vapid love story is teeming with genre clichés, rote storytelling, and appallingly juvenile characterization is accurate although that doesn't really capture the essence of its badness. Hey, let's face it: New love makes burbling, cooing half-wits of us all. For me -- and I suspect for even the most incorrigible of romance junkies -- the really off-putting aspect of Chen's film is its emotional inaccessibility. Not that we're incapable of relating to the basic theme of love between a callow, fiftyish womanizer (Gere) and naive 22-year-old with a fatal heart condition (Ryder). Both actors are as magnetic and likable here as they've ever been, and Chen (Xiu Xiu: The Sent Down Girl) directs the erotic scenes with a discreetness that effectively suppresses any potential gag reflex. The heroine-with-dread-disease element, though a standard bit of romance-movie schtick, isn't an insuperable problem either. But there's something terribly off-key about the way Gere's and Ryder's characters are drawn and how they relate to one another. For a guy described as a rakish, incorrigible cocksman, Gere's Will seems awfully reticent and vulnerable in dealing with women. After all, Ryder's sweet, Emily Dickinson-spouting Charlotte, who makes Stacy Edwards' naïf in In the Company of Men look like Mae West by comparison, is exactly the kind of helpless fawn who should make any veteran babe-scammer worth his Rohypnol slaver like a hungry timber wolf. I guess the point is that Will is reluctant to hurt Charlotte because she's unique in his experience. In traditional romance stories, though, the male character arc is all-important. And in this movie we see very little meaningful evolution in Will's basic nature. Even more problematic, Ryder's character seems fully 10 years younger than her nominal 22. Squirming, giggling, and flouncing around in diaphanous Stevie Nicks-esque scarves, she'd probably strike most 17-year-old guys as immature. And this is before she starts reciting Dickinson verse in a tremulous squeak that makes the Belle of Amherst's couplets sound like Jewel lyrics. Not surprisingly, Gere appears visibly reticent in romantic interludes with Ryder. (Maybe her beady eyes and hyperactive manner remind him a bit too much of the gerbil with which he's inextricably linked in Hollywood urban mythology.) In any event, I can honestly say that I've never seen a more openly unenthusiastic audience response for a major-release romance movie. And seldom have I been so willing as a critic to endorse the verdict of Jane and Joe moviegoer. 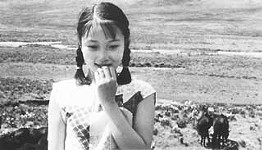 Xiu Xiu: The Sent Down Girl
Actress Joan Chen (The Last Emperor, Twin Peaks) makes an impressive debut as a film director with this evocative Chinese drama. The story is a ...