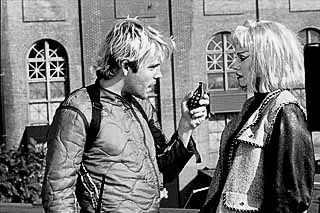 You say you want a cinema revolution? Well, recruitment centers are likely to be found anywhere that's showing John Waters' latest opus, Cecil B. DeMented. The movie throws a comic stink bomb into the gaping maw of bad cinema -- defined by Waters' self-styled revolutionaries (who call themselves the Sprocket Holes) as movies such as Patch Adams, Forrest Gump, and just about anything whose title ends with the number “2.” Waters, in his kitschy cool, anti-authoritarian filmmaking style, is in excellent form in Cecil B. DeMented; one senses that this is a true work of the heart. And how could it not be? Just check out this storyline. Cecil (Dorff), the lunatic director, leads a devoted band of cinema terrorists in the kidnapping of movie diva Honey Whitlock (Griffith) during the world premiere of her latest movie. They bleach her hair and trick her up in their over-the-top garb and make-up, and force her to star in their radical underground movie, which is staged and filmed on the fly during various guerrilla-style actions. The Sprocket Holes are a hilarious crew; each sports a tattoo of the name of cherished director (Warhol, Fassbinder, Herschell Gordon Lewis, Otto Preminger, Spike Lee, Kenneth Anger, and William Castle to name but a few) and spouts slogans like, “Death to the cinematically incorrect,” and “Punish bad cinema” at the drop of peroxide bottle. They also “save themselves for cinema” by remaining celibate and channeling their sexual frustration into their work. These are true “no-budget” filmmakers, who understand that all it will take is one ticket sale for their movie to turn a profit. The made-over Honey Whitlock is eventually brainwashed into discovering the error of her ways. Not since Douglas Sirk made such perfect use of Lana Turner in Imitation of Life has a director used an actress so seamlessly. Casting Griffith as a great actress forced to slum her way through the underground is a brilliant stroke. Even more delicious is the casting of Waters regular Patty Hearst, whose own kidnapping and later identification with her captors is practically a real-life model for this bizarro comedy. Like all Waters films, Cecil B. DeMented is an uneven work. It delivers a barrage of hilarious one-liners and then goes through stretches of unfocused activity. Of course, this film will have special delights for film aficionados for whom the in-jokes, like the dubbed version of Les Enfants du Paradis, will have an extra kick. If this movie does anything to rally crowds against cinema's mass distribution of mediocrity then it has served a noble purpose. If I were a member of the Sprocket Holes, I'd tattoo the name of John Waters on my raised middle finger. 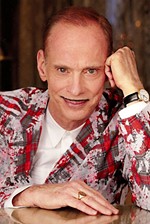 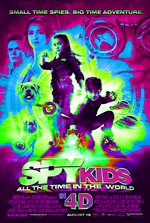 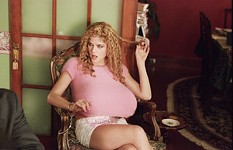 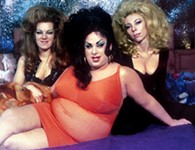