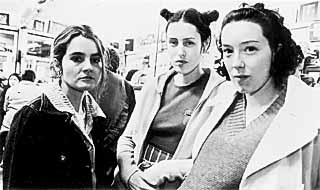 Director Michael Winterbottom's looking glass could use a spot of Windex and thorough scrubbing. Far from the mesmerizing warped-eye-view and splendid chaos of Alice's unreality, the London of Wonderland is a sickly and bitter town, breeding legions of defeated and dolorously unhappy waifs and souring marriages before they even have a chance to properly begin. Winterbottom directed the underappreciated Welcome to Sarajevo a few years back; that film was a bit of a muddle as well, but at least it didn't make you want to go home and curl up with a nice razor blade afterward, as this one does. There's such a perfectly ghastly sheen to the layers upon layers of personal misery that Winterbottom heaps atop his hapless characters (from a first-time script by Laurence Coriat, a writer bound for a tragic end if he continues in this lachrymose vein much longer) that you can't help but feel somewhat manipulated. I kept thinking, for god's sake, these people need a good dose of E and a night out at Ministry of Sound. I mean, that's London these days, innit? Not in the aptly named Winterbottom's world, it appears. Instead, he follows the bleak and emotionally desolate wanderings of three sisters, each with her own impossible cross to bear. There's Nadia (McKee), a pale, Bjorkian waif with a mouseketeer 'do and a love life as empty as a porter pint at a 2am pub. Her older sister Debbie, a cig-smoking divorcée with a soccer-hooligan ex (Hart), has her hands full with her hairdressing business and a little boy with a mind of his own (Marfleet). And then there's Molly, pregnant and freckled and facing a straying husband of her own (Simm, Human Traffic's hyper-partying Jip). Winterbottom also hands us the trio's parents, a doleful pair ready for the glue factory (Markham, Shepherd) and currently making the worst of a marriage that appears to have evaporated a decade or two back. With this many interconnecting characters wandering around in search of love and redemption you'd think someone -- anyone! -- would at the very least open the right door, but no, Winterbottom and Coriat have it in for them but good. (You can almost see Coriat hunched over his desk, furiously scribbling away: “Let's see now … Aha! A motorcycle accident! That'll do nicely, heh, heh, heh.”) Creepy. Winterbottom, to his credit I suppose, gives us a glimpse into “unseen London,” so far from the madding crowd that all you can hear is the sound of nails being steadily cut to the quick. It's not an emotional lorry ride I'd prefer to take more than once, though. Too much of anything -- happiness, misery, ungodly wretchedness beyond the pale -- is rarely a good thing, and Wonderland is so bereft of hope (except for a weak, final-act dollop of what appears to be light at the end of the tunnel, and that in itself feels pretty false) that it's a chore to withstand. It should be noted that the acting (particularly McKee and Hart), Michael Nyman's lilting score, and Winterbottom's direction are all topnotch. None of that, however, can make this epic journey into the wan light of deteriorating humanity any more palatable. It wears its joylessness like a badge of urban honor.