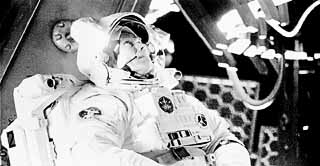 Space Cowboys is exactly what it looks like: a lighthearted action adventure starring four of the most likable guys on the planet … oops, make that the galaxy, not because Space Cowboys opens new horizons but because it takes an iconic quartet and knocks the gravity out of them. The storyline is thoroughly familiar, we've seen this plot setup many times before. Geezers, 40 years past their prime, are obliged to undertake a dangerous mission for which they are uniquely qualified, and along the way they must also show the callow youngsters how the job is really done. It's a staple of the films of Howard Hawks and Sam Peckinpah -- older men forced by circumstance into one last caper. Another familiar convention in Space Cowboys is the recruitment sequence in which the ringleader goes to each of the team members to talk him into the mission and give the viewers a glimpse into his life sans the mission. Familiar as this all is, Eastwood pulls it off with amiable aplomb. Space Cowboys has a loose, easygoing charm and these four guys interact like the old pals they're supposed to be. Only the last 45 minutes of the film take place in outer space, but the nifty Industrial Light & Magic effects will satisfy anyone hoping for Armageddon: Old Farts in Space. The problems with Space Cowboys arise with its implausibilities that have them whizzing through NASA flight school with questionable tactics and a truncated time frame. Although the film was made with NASA's approval, the portrait of its lax medical and individual performance standards is unbelievable, given all we know about the agency. James Cromwell plays a NASA bureaucrat as a Southern-accented version of the nefarious character he played in L.A. Confidential. Even if you haven't seen the previous movie, you can tell that his is the character who wears the black hat. Other likable actors such as William Devane, Barbara Babcock, and Blair Brown have tiny roles that make you long for more. A ridiculously implausible happy ending unfortunately serves as the film's final note. Yet, even though these lapses get in the way of the story's believability, they do not impede the movie's likability -- especially in this summer climate of teen-identified entertainments. As a director, Eastwood lets his stars have the stage, and given this opportunity, these actors prove that they still possess the Right Stuff.