Kenneth Branagh did such a great Woody Allen impersonation in Celebrity that there's a certain logic to Branagh's copying of Allen's subsequent (and questionable) move into musical comedy with Everyone Says I Love You. The versatile Branagh, whose stage and film interpretations of Shakespeare are renowned, has recast one of the Bard's least popular plays, Love's Labour's Lost, as a musical comedy in the style of a 1930s Hollywood musical. In a startling display of creative chutzpah, choreographed dance routines and songs by Cole Porter, George Gershwin, Irving Berlin, and Jerome Kern punctuate the Shakespearean text. The actors are also clothed in Thirties garb, and portions of the story are related by means of fictitious newsreel footage that mimics those of the times. The effect is weird but it, actually, kind of works, illuminating both Shakespeare and the artifice of musicals. Branagh's filmed version of Hamlet in 1996 was a four-hour-long, unexpurgated rendition of the famous play that proved his loyalty to the Shakespearean text and his belief in its unadulterated purity. Perhaps it's having created such an impressively faithful work that now allows him to take one of Shakespeare's less enduring comedies and reconfigure it into a frothy song-and-dance mambo. The 1594 play is slight confection about a community of four scholars in a fictional land who have forsworn women, but become enchanted with a party of four Frenchwomen who have arrived on a diplomatic mission. Of course, everyone falls in love but has to keep the secret from the others, and then the women, learning of the men's vows and secrets, gently mock their suitors. What a perfect situation for prompting them to break out into a few choruses of “I Won't Dance, Don't Ask Me.” The characters court to the strains of “I Get a Kick Out of You,” “The Way You Look Tonight,” and “Cheek to Cheek.” By the end, they've changed their tune and are crooning “Let's Face the Music and Dance.” The song selections are all choice and really feel appropriate to the mood of the scenes. For modern audiences, they perhaps amplify the Shakespearean themes better than their “stuffy” verbal counterparts. And the dance numbers that emulate the moves of Rogers & Astaire, Gene Kelly, and Busby Berkeley are spirited flights of fancy that convey the lighter-than-air feeling shared by lovers who are not necessarily light on their feet. Among these actors, only Nathan Lane (cast as the Clown) could be said to be a conventionally experienced song-and-dance performer. What the others lack in vocal dexterity and nimbleness, they compensate for with good cheer and merriment. Love's Labour's Lost feels very true to the sensibility of the Hollywood musical in its demonstration of the idea that there resides a song in every heart and rhythm in every step. All that's needed is love's liberation to unlock hidden melodies. If you hate musicals, however, Love's Labour's Lost is unlikely to be the film to convince you otherwise. And the film is often unevenly balanced between its stretches of Shakespearean declarations and musical edifications. This is neither Shakespeare Lite nor a Stratford Revue. It's ambitious storytelling that remains in the memory like a midsummer night's dream. 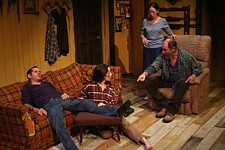