Bemoaning the ever-declining standards in American cinema at this stage in the game is pointless, considering how completely saturated the market is with crap. So let's just approach this picture as what it is: a Jerry Bruckheimer film. It's fast, sexy, and loud. Is it silly, too? Sure is. But no one really expects great art from a story about a bunch of Lycra-and-leather bartenders. One would hope, however, for some consistency in tone and theme, and unfortunately Coyote Ugly drops the ball big time on this one. Not to be glaringly stereotypical, but I think it might be a gender thing. Coyote Ugly is written by a woman (Gina Wendken) and directed by a man (David McNally). It quite easily could have been a girl-power pic: Ingenue Jersey (Perabo) hits the big city with songwriting dreams, finds a job and a substitute family at a bar owned and operated entirely by women. But a funny thing happened on the way from the script to the screen -- all those riot grrls got tube tops for Christmas and McNally got a little giddy with the wet T-shirt slo-mo shots. It's just a theory, and a highly presumptuous one at that. Wendken could very well have penned script directions like "Then Jersey douses herself in tequila and arches her back erotically." Furthermore, after the camera practically falls over itself trying to look up the girls' skirts, the script then argues that Jersey is whoring herself out at the bar. It can't decide if it wants to glorify or moralize the flesh parade. Failed feminist statement or not, Coyote Ugly is a likable, if confused film. The coyote gals, including the Russian tease (Miko) and the hard-working, hard-drinking Boss (Bello), all ante up the necessary bravado to be bad-ass barkeeps. The males do quite nicely as well, with Adam Garcia as the supportive boyfriend and John Goodman doing an affable turn as Jersey's dad. The film drags quite a bit whenever the action veers away from the bar; Jersey's songwriting ambitions aren't terribly interesting (and her "soulful" songwriting moments are downright cringe-inducing). But so long as the coyotes are in the house, it's hard not to want to sidle up to the bar and holler for another round. After a couple of shots, anything starts to look pretty good. I suggest a few stiff drinks and a suspension of disbelief, and this frothy little number will go down just fine. 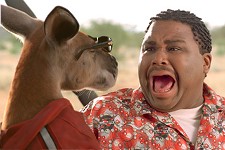 Kangaroo Jack
While on a panel at the 2002 Austin Film Festival, Kangaroo Jack co-writer Scott Rosenberg recounted with glee how he pitched the idea of Jack ...