Thomas and the Magic Railroad 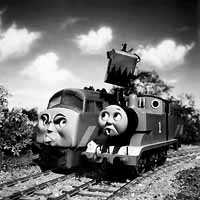 “Little engines can do big things” is the nominal moral lurking in the background of this feature adaptation of the popular kids' television series imported from Britain. Thomas the Tank Engine, who more than anything wants to be “a really useful engine” is the little engine that could, can, and does, but that doesn't mean I have to like him, or his big-screen debut, a meandering, dull, and maddeningly unfocused wad of pop pap that rivals a belt-sander to the psyche for sheer screeching annoyance. Trains, of course, hold a special place in kidhood imaginations, and even more, it seems, for young Brits. The Thomas stories, originally penned by Anglican clergyman Rev. Wilbert Awdry some 50 years ago for his own children, have found new life in the past two decades as part of the Shining Time Station PBS series, in which Ringo Starr and others interact with the tiny, smiling engines on the mythical island of Sodor. As befits a story originally concocted as a means to put the kids to sleep, the Thomas series features the talking train's brief, unthreatening adventures backed by the occasional obvious lesson: Strive to be useful, don't scowl, and never let your conductor run low on his magic gold dust. At 86 minutes, Thomas and the Magic Railroad is too long by an hour and a half. The film's several plotlines, alternately involving Peter Fonda as the brooding caretaker of a dormant “female” engine named Lady, Mara Wilson as the young girl who helps him bring her back to life, and Alec Baldwin as Mr. Conductor (who's running out of the magic gold dust that allows him to travel to the train-populated isle of Sodor), feel oddly mismatched and are almost sure to be confusing to kids who'd much rather see Thomas grin his way through the film and never mind the bipeds. The human characters appear to be an afterthought here, and the film's entire plot might well have been cobbled together on the back of someone's happy-hour napkin. Worst of all, though, is the grating manner in which the film talks down to its audience; if you thought Rowan Atkinson was the height of British smarm, you have yet to see an 18-inch Baldwin brother turn to the audience and coyly ask for help in solving the many mysteries of Thomas' world while standing in a flower pot. I'd have offered to help but by that time I was otherwise occupied, praying for a quick and painless death and an afterlife devoid of chatty trainspotters. As for Fonda's participation in the film, I can only assume this was due to some sort of community supervision directive. Channeling the spirit of bongloads past, he plays crotchety recluse Burnett Stone with a glazed, vaguely menacing sheen entirely inappropriate to the tone of the film. Holed up in a mountaintop cave, he glowers and sulks his way through scenes as though this were some lost Tennessee Williams play, not kidfluff-lite. The ringer question is, of course, will kids like it? Probably only if they've already fallen under the spell of the PBS re-runs. It's doubtful that this murky tale will win any new recruits, and judging from the fidgets and squirmies I spied rippling through the young audience at the preview screening, no one was paying too much attention to Thomas and his gang anyway. Even Amtrak hasn't seen a derailment this godawful in some time.