Has Alan Rudolph gotten lazy? The veteran of independent film whose career spans three decades has always been ready for a challenge, whether to himself by adapting a digression-heavy novel like Kurt Vonnegut's Breakfast of Champions or to the audience with a surreal mind-bender like 1992's Equinox. With his new film (which he also wrote), he seems content to slap a flimsy film-noir plot on an unending stream of malapropisms and word games and call it a “screwball noir.” The verbal missteps come from the mouth of aspiring sleuth Trixie Zurbo (Watson) as she stumbles her way toward solving the murder of a never-been lounge singer (Warren) involved with a state senator (Nolte). Her language problems go largely unnoticed by the other characters who are too busy acting out their own quirks in the bizarre lakefront resort town of Crescent Cove. Rudolph's plots are always organized more intuitively than logically, and this is no exception. However, he seems to use the convoluted plots of the hard-boiled detective films of the Forties as his excuse to pepper the script with coincidences, hints, and implausibilities that wouldn't survive an elementary screenwriting class' roundtable discussion. The film-noir retread, and the romantic comedy, seem to be the genres of choice for indies nowadays, probably because they're cheap to make. Maybe Rudolph doesn't want twentysomething ex-film students to have all the fun. In the hands of a less talented cast the film might be an interminable exercise in self-indulgence. Nathan Lane, however, delivers some choice lines as a hammy entertainer at the casino where Trixie works, and Will Patton seethes admirably as a borderline psychotic land developer. And Nick Nolte, as the sexually voracious senator, steals absolutely every scene he's in. With his gravel-choked voice, creased and pitted face, and a shock of blinding white hair, Nolte brings an unnerving menace to Rudolph's idiosyncratic dialogue, becoming a kind of politically programmed and soulless robot, or maybe an insane but articulate grizzly bear in a three-piece suit. It is in the scenes with Nolte that a glimmer of insight emerges: What the senator says, a jumble of quotes from real politicians, makes sense to the ear but not to the mind. On the other hand, we understand the meaning behind Trixie's mixed-up words. Trixie is an innocent in a world of sliver-tongued corruptors. Too innocent, even. Her eyes remain wide open but uncomprehending throughout the film, making a poor stand-in for the audience while unraveling the mystery. I suspect that providing a compelling answer to “whodunit?” was pretty low on Alan Rudolph's to-do list for this mystery-comedy, though. In his efforts to cram an amusing blunder into Trixie's every line of dialogue, he seems more interested in keeping himself, rather than the audience, laughing. 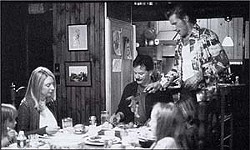 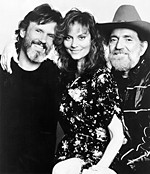 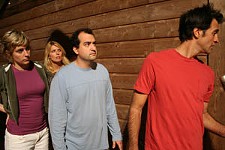 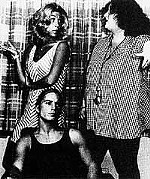