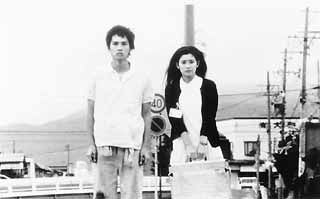 So much of what passes for American pop culture in the movies these days -- from the work of Quentin Tarantino and his million-and-one knockoffs to the manic comic roustabouts of the Farrellys and other laff-masters -- has been appropriated from Eastern cinema that it's become hard to tell who did what first. Adrenaline Drive, a member of the slightly-less-common-than-four-leaf-clovers genre known as the yakuza comedy, only adds to the confusion. Its rhythms are purely American, you think, until you realize that the Japanese have been churning out these sorts of sporadically wacky shenanigans at least as long as their U.S. counterparts have, and possibly longer. In a cinematic world dominated not only by Hollywood, but also by Bollywood (the Indian cinema), Hong Kong action cinema (now too often relocated to either L.A. or Toronto), and the Japanese bubble-gum pop silliness of Pokémon and Godzilla (themselves a reflection of previous American pop-culture outlays, and vice versa), it should come as no surprise to anyone that Adrenaline Drive feels for all the world like a Meg Ryan/Billy Crystal heist comedy transposed to the Far East. It's not, though, Yaguchi's frothy, funny take on the yakuza (Japanese mob) meets the young-lovers-in-peril genre is a winning amalgam of both of those highly clichéd storylines. It's also flavored with enough of Yaguchi's bizarre Tokyo-pop sensibilities to make it soar where Hollywood would be most likely to let it plow into the ground. The plot, a byzantine and supremely zany affair worthy of the Marx Brothers, pairs Ando's spineless salaryman Suzuki with Ishida's wallflower nurse Shizuko. The pair meet when the hapless Suzuki runs afoul of a yakuza boss in a minor traffic accident. Taken back to the criminal's hideout to make amends, he is the penultimate survivor of a sudden gas-line explosion. Surrounded by the gang's drug money, he hastily grabs one of those metal suitcases used, apparently and exclusively, for toting vast sums of stolen loot, and goes on the lam with nurse Shizuko, who just happened to be passing by at the time of the conflagration. Of course, Yaguchi's film wouldn't be much more than a trifle were it not for the presence of the only surviving yakuza member, Matushige's creepy Kuroiwa, a man so stoically evil that he commands his legions from his ICU and sends them scurrying after the hapless pair. These legions, mini-yakuza with names that likely translate along the lines of Dopey, Sneezy, and so on, are portrayed by the Japanese comedy clique Jovi Jova, a Kids in the Hall-style cluster of babbling, goofball non-threats. Much of the comedy is overt in Adrenaline Drive, though Yaguchi's direction and script allow for subtleties that more than likely wouldn't have made it into a Western version of the story. Above all, Yaguchi seems to be making a statement on the transformative power of those fabled metallic bags o' cash. The Beatles got it wrong: It isn't love you need, it's the simoleons, baby.