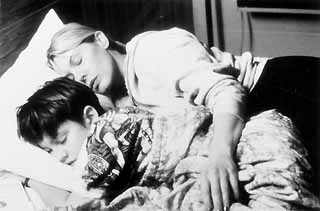 It's been 17 years since Bette Gordon made her last feature film Variety, a fascinating work that, among other things, had the temerity to present women as the inventors of their own pornographic fantasies. Variety was so intriguing and thought-provoking in both its subject matter and artistic ambition that inquiring minds always wanted to know when Gordon would make another feature. Luminous Motion, which is adapted from Scott Bradford's novel The History of Luminous Motion, is her belated second feature, although the director has been occupied over the years with television projects and shorts, as well as her associate professorship in film at Columbia University. Luminous Motion presents the challenging story of a mother-and-son relationship, a relationship that is both unusual in its detail yet ordinary in its Oedipal dynamics. The story is narrated by the son Phillip (Lloyd), who at the beginning tells us that he has a hard time figuring out what is real about this saga and what is not. Moreover, the film is visually presented in such a way that by the end we tend to be as fuzzy-minded as Phillip in regard to what actually happened and what was imagined. Ultimately, it matters little since neither is less real. Luminous Motion at first seems to be a road picture, with Phillip and his mom (Unger) always on the move in their red Chevy Impala. Phillip studies biology and physics textbooks in the back seat while Mom drives from place to place hustling men and separating them from their credit cards. Phillip believes he has a perfect life -- being with his beautiful mother and remaining in constant motion. But when Mom develops a hankering to settle down in one place, Phillip's dream hits a roadblock. His mother's new provider must be eliminated, and images of his father continually pop into view. The whole thing would be classically Oedipal were it not for the sense that the real issue under Gordon's microscope is the patriarchal social order. Filmed in a transfixingly dreamy manner, the movie's creative sensibilities echo the title: Luminous Motion. It drags a bit in the second half as a few more characters enter the story and divert the focus. The one thing about Luminous Motion that can be said with certainty is that Bette Gordon should be making more movies. 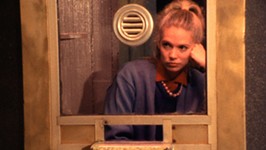