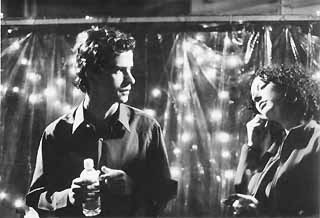 At the risk of sounding like a complete blurb whore, let me start off by saying that if you're planning on seeing only one rave movie this year, make it Groove. The movie is a fun, well-assembled and -performed slice of life that requires no special affinity with the subject matter in order to -- ahem -- get one's groove on. This debut feature by film editor Greg Harrison tells the story of one important night in the lives of a group of young people, and in this it has a greater resemblance to such classic films as American Graffiti and Dazed and Confused than it does to recent rave flicks like Human Traffic and Better Living Through Circuitry. Opening with the title credits spelled out in a computer-like font, the movie captures the sense and feel of the scene through creative narrative means other than a well-meaning TGIF spirit and drug-induced, music-enhanced visual and aural whirls. Harrison's experienced editing skills are given a good workout here too, and his first-timer's wisdom in picking a project whose primary set needed to be little more than a big, empty warehouse is not to be underestimated. Much of the movie is seen through the eyes of another newby David (Linklater), a studious tech writer who dreams of becoming a novelist. Encouraged to attend the night's rave by his brother Colin (Kirkwood), who has a surprise planned for his girlfriend Harmony (Firgens), David swallows Ecstasy for the first time. Through David we also become familiar with a number of the other partygoers, most significantly Leyla (Glaudini), a veteran of the international rave scene who's beginning to wonder what other opportunities in life she may have passed by. The whole movie is, of course, set against a propulsive but ever-changing electronica score that's spun by a variety of DJs, including DJ Pollywog, WishFM, and John Digweed. Less a barrage of heart-pumping bass lines than it is a survey of the varieties and distinctions between the different subgenres of electronica, Groove in this way also recalls the music-intrinsic structures of American Graffiti and Dazed and Confused. At times, Groove's dialogue seems a bit hokey and contrived, but it moves swiftly enough that these are blips rather than impediments. On the whole, Groove achieves its high by tapping into the real thing -- the wonder of making movies. 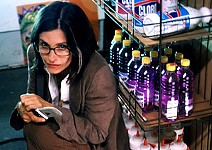 November
November, starring Courteney Cox, is a dense, dark head-trip of a movie that seems like the bastard offspring of Memento and Mullholland Dr.