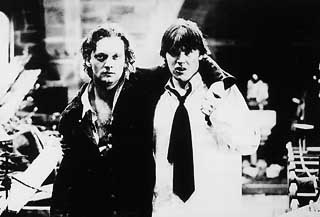 I'm sure there are plenty of good things to say about Scotland, but you'd never know it from films such as Trainspotting and this 1997 outing by Peter Mullan (more recently he starred as the title character in Ken Loach's My Name Is Joe). Both films depict a gritty, frazzled, so-horrific-it's-hilarious undertow of urban malaise and disenfranchisement that is so outright repellent that after viewing them most sane people wouldn't touch down in Edinburgh or Glasgow on a dare. Like Danny Boyle's nod-off to Scottish mainliners, Orphans is a twisted black comedy so shot through with bloody bad cheer that it frankly warrants a whole new genre of its own: doomedy, perhaps. The film begins with the death of the Flynn family matriarch. Following the laying-in, Ma Flynn's four grown offspring -- eldest Thomas (Lewis); alcoholic Michael (Henshall); hotheaded college boy John (McCole); and only daughter Sheila (Stevenson), who suffers from cerebral palsy and is confined to a wheelchair -- embark on an orgy of emotional and physical self-destruction that uses as its centerpoint the children's own grief for their lost mother (whom we see in flashback comforting her brood during a particularly nasty thunderstorm). Thomas, who fancies himself the most mature of the lot, locks himself in the church to spend the night before the funeral tending to his mother's corpse. He's so wrapped up in his own level-headed misery that he hardly sees the destruction that's raging among his siblings. What's more, real destruction, in the form of a North Atlantic gale, is sweeping through the Glaswegian streets as a heavenly counterpoint to the Flynns' earthbound sorrows. Michael, after cooling his heels at the local pub, finds himself in a tussle with skinhead DD Duncan (Shields), who stabs him in the belly. Michael then decides to forego medical treatment in the hope of falsely securing worker's compensation the next day at work. Bad stomach wounds lead to bad choices, and, predictably, by the end of the film he's barely there. John, maddened to a white-hot rage by his brother's stabbing, spends the drenching night vowing to kill Duncan, and toward that end hooks up with his sinister cousin Tanga (Gallagher) to procure a shotgun (clearly not as readily obtainable in the UK as here in America). And Sheila, perhaps the most grief-stricken of all, ventures out into the stormy night alone but for her chair, which promptly gets stuck in the cobbles. Admittedly, none of this sounds very funny in synopsis, but Mullan -- not to mention this wonderful quartet of actors -- makes this comedy of utter loss such a palpable, wearying thing that you're forced to identify with this motley lot, no matter what boundaries of decency they trample. It's simply a wonderful, horrible nightmare of a film, clear-eyed and yet driven by the pure insanity of the grief-struck. The film's only shortcoming has nothing to do with Mullan's directing and everything to do with the Americanized subtitles that have been tacked on the bottom of the screen to ease Yanks' discomfort with the omnipresent Scottish burr. During the course of a film in which nearly every utterance contains at least one gutter epithet, these puritanical subtitles have eradicated the lot, changing the subtle nuance of virtually every single line in the film. The distributor's inability to trust the audience on this count is, frankly, a insult to the viewer, and the disastrous subtitling should be ignored completely if at all possible. 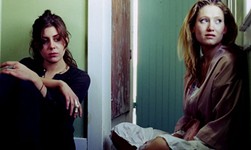 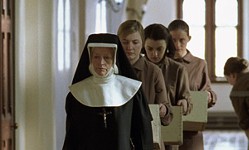 The Magdalene Sisters
A grim and unmistakable masterpiece of bleak, black sorrow.