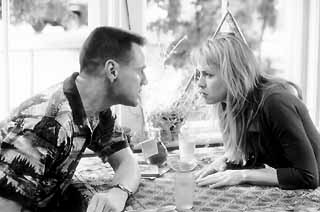 The Farrelly Brothers -- Providence, Rhode Island's answer to global intellectual depreciation -- have long been accused, pointedly at times, of intentionally “dumbing down” American cinematic and pop-cultural values. The fact that these two brothers get a kick out of excessively lowbrow toilet humor -- and the fact that their massive audiences also enjoy this sort of sub-sophomoric humor, in droves no less -- is taken as a signifier that the country is on some sort of massive mental downturn, with projected results of deflated math scores and wanton pie-throwing in the streets. Why can't Johnny read? It must be those darn Farrellys. Election year hysterics notwithstanding, I think detractors of the Farrellys' strain of rump 'n' bump humor are overlooking the fact that their four films -- the woefully underappreciated Kingpin, Dumb & Dumber, There's Something About Mary, and now Me, Myself & Irene -- are as zealously intellectual in their anti-intellectuality as the early Marx Brothers. It's smart, pro-artistic comedy masquerading as insipid farce, a wolf in clown's clothing, and rigorously Dadaistic in ways modern audiences aren't likely to note. And I'd guess that's fine by the Farrellys, who are probably more concerned with making audiences lose their lunch from laughter than creating any bold artistic statements (and wisely so). Nothing is as tiresome as a comic mind on a mission. That said, this so-stupid-they're-smart filial directing team is also a hopelessly romantic duo. From their first film to their newest, the Farrellys have shown a keen grasp of not only the subtle comedic principles involved in semen gags, but also the nuances of the traditional Hollywood romantic comedy. Drop them 60 years in the past and they'd likely have been helming Tracy and Hepburn or some bizarre riff on Bringing Up Baby. Me, Myself & Irene continues their love affair with bodily functions and mismatched lovers (and mismatched lovers' bodily functions, natch). Carrey, returning to the crazed physical comedy with which he made his name, plays Charlie, a repressed Rhode Island Highway Patrol officer badly in need of some therapy. In lieu of that, Charlie develops a split personality, which manifests itself in the form of Hank, a cantankerous alter-ego who surfaces when Charlie gets riled or forgets to take his meds. The plot, something about rogue FDA agents and bad cops, is so vague as to be downright vaporous. At any rate, it's merely a Hitchcockian MacGuffin to bring star-crossed lovers Charlie, Irene (former Austinite Zellweger), and bad-boy nonentity Hank together. It's also a showcase for some of the Farrellys' ripe, politically incorrect humor. In short order, the film's takes on little people, albinos, the state of New York, and even Woody Allen (whose (in)famous quote regarding his dalliance with Soon-Yi Previn, “The heart wants what it wants,” is cheekily uttered by Charlie's wife as she leaves him in the dust). While not as trenchantly oddball as There's Something About Mary, the duo's creative peak to date, Me, Myself & Irene has those proverbial big laffs in spades. If you think you can groove on the sight of an undead Holstein being shot through the head six times, not to mention Carrey's flapdoodle mug going through countless maxillary fluctuations, this may just be the best comedy/love story/PETA-protest of the summer.