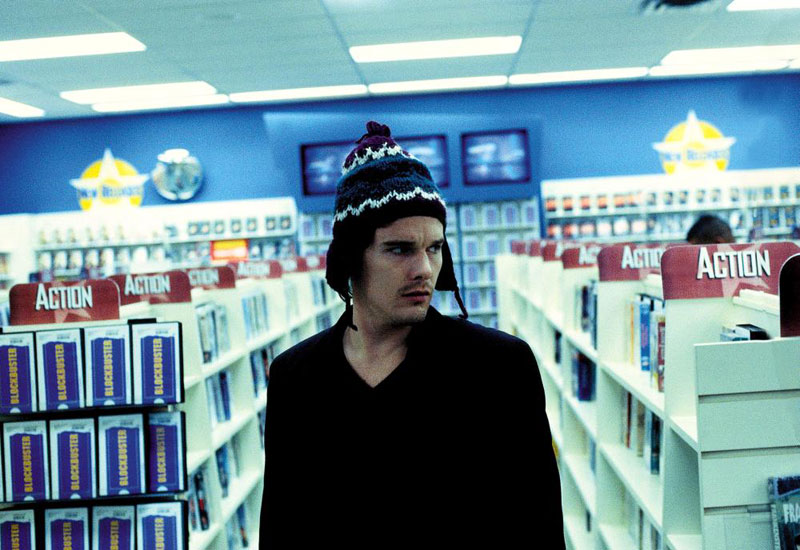 You have to admire Michael Almereyda's contemporary rendition of Shakespeare's Hamlet if for no other reason than its audacity in staging of one of the passive prince's timeless soliloquies in the Action aisle of his local Blockbuster. “Go Home Happy,” chirps the store banner in the background. Low-budget king Almereyda's Hamlet is smart and feisty, keeping the heart of the drama intact while excising sizable portions of the original's dialogue. Set in contemporary Manhattan, this is a Hamlet marked by the trappings of our electronic age. Faxes and answering machines, Polaroids and videotape, computer hacking and cell phones -- all are used as intelligent spurs to the action (Hamlet tapes himself in Pixelvision working on his “to be or not to be” speech; later, he hacks into Rosencrantz and Guildenstern's laptop in order to alter their royal instructions). Almereyda positions this Hamlet within the corporate world and opens the movie with a press conference and screaming USA Today headlines that announce the takeover of the Denmark Corp. by the scheming Claudius (MacLachlan) and his forthcoming marriage to the widow (Venora) of the recently deceased Denmark Corp. president. For the most part, Almereyda's contemporary transpositions work and once again demonstrate that Hamlet is a story for all time. The performances, however, are a sometimes spotty thing. When they are good, as in the case of Venora's Gertrude and Murray's Polonius, they are sublime. Venora plays Gertrude as a corporate trophy wife, content in her role as Mrs. Denmark Corp. yet harboring a marked emotional fragility regarding her role in the cover-up and her son's petulant ways. And Bill Murray's Polonius is so delightfully coy and self-satisfied that this performance is reason alone to see the picture. Hawke plays Hamlet as a slacker prince, clearly affected by his youthfulness and callow emotional state. He does not always possess the dramatic weight necessary to make all the scenes work. Stiles' Ophelia fares less well, despite her familiarity with Shakespearean film updates in Ten Things I Hate About You and the upcoming O. Also, look quickly or you'll miss Paul Bartel in his final film role and Jeffrey Wright (Shaft) as the gravedigger singing Bob Dylan's “All Along the Watchtower.” The song provides a perfect touch for this film and reveals the kind of thought that went into Almereyda's script. Little in the writer-director's past (Twister, Nadja, and several Pixelvision shorts) prepared us for his remarkable capability as a Shakespearean interpreter. He will now have a permanent home in the Hotel Elsinore.