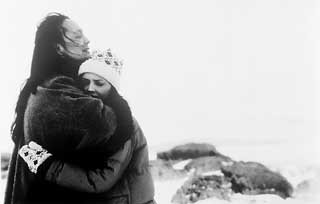 A quiet moodiness envelops The Hi-Line, the first feature film by writer-director Ron Judkins, an Oscar-winning sound recordist (Jurassic Park, Saving Private Ryan). The Hi-Line (which was a 1999 Sundance pick and an audience award-winner at the last Austin Film Festival) is a story that reveals itself slowly, letting atmosphere and curiosity lead our way into the narrative. At first, we're given mere shards of a story. A man named Sam Polvino (Alosio) drives to snowy Whitman, Montana, checks into a motel, and looks in the phonebook for the number of Vera Johnson (Cook), whom he calls to set up an interview. He tells her he's a scout from a department store that will be locating nearby, and during the course of a very odd interview, offers her a potential job. As viewers, we sense there is something extremely fishy about all this, although it is impossible to fathom just what. Vera, however, falls hook, line, and sinker, so stultified is she by her dead-end life. Two years out of high school and still living at home with her parents (Kidder and Margolin), Vera is yearning for something that will shake up her life. What ensues does alter its path. First there is the package that arrives for her (via Sam) from a deceased prisoner in an Illinois prison. Next comes a journey to a remote corner of Montana to find a woman named Singing Bird (Cardinal). Sam accompanies her, possibly feeling protective of her vulnerability or gullibility. And herein lies the problem with The Hi-Line: Narrative and emotional cues are doled out so sparingly that we are frequently left with little more than intuition and guesswork to guide our understanding. The movie is well-performed, but the pace proceeds at a glacial speed. Conversations are minimal and notable for their long silences. Undeniably, this contributes to the moody atmosphere and seems somehow appropriate against this frozen, wintry landscape. But the technique also runs the risk of tiring audience members who may also become disgruntled by the limited payoff in terms of the story's originality. Ultimately, this is a conventional tale about a young woman's journey of self-discovery, one that leads, of course, to a conventionally “happy ending.” Cook, who is most familiar to audiences from She's All That and as the star of those provocative “This is your brain on heroin” PSAs, seems to be underplaying a bit here, although newcomer Alosio and veteran Cardinal turn in notable performances. But the real star of The Hi-Line is the Montana countryside; it's as hushed, forbidding, and chilly as the characters it cloisters.