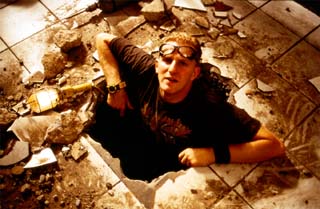 Woody Allen returns to slapstick comedy in this new movie that's a throwback to the days of his early film features. With its story about an inept bank robber, Small Time Crooks readily calls to mind Allen's Take the Money and Run (1969). Pinch a few grains from that movie's bungling bank robber, several more from the relationship between Ralph and Alice Kramden, and some plot maneuvers from Born Yesterday, and you wind up with something resembling Small Time Crooks. The movie is a pleasant frolic, but fairly inconsequential in terms of the overall Allen output. Some of the movie's physical gags are hilarious (the burst water main being the prime example), while others (like Allen's repeated attempts to surreptitiously climb a staircase) are tedious and repetitious. Of course, the disappointment would not be so great were this not a new Woody Allen film. Except for a scattered few scenes, however, Small Time Crooks seems like a comedy that just about any joker could have made, which is certainly not something that could be said of most of Allen's other films. Allen also stars here as the story's lead crook, Ray Winkler, who concocts a plan to rob a bank by digging a tunnel through the basement of a decoy business situated next door. The crux of the story is something along the lines of “be careful what you wish for.” As soon as Ray sets up his wife Frenchy (Ullman) in a cookie-store front, the business takes off, and faster than you can say “Famous Amos,” the Winklers are rolling in dough. Until that point Small Time Crooks is an amiable affair: Ray's band of bank robbers is a hilariously dim bunch composed of Rapaport, Lovitz, and Darrow. Their escapade has a goofy charm and is packed with fun banter. Add Elaine May as Frenchy's dimmer-than-dim shop assistant, and you have the makings of good comedy. But once success invades the Winklers' lives, these characters are all dropped (except May) and the story develops its Born Yesterday component in which Frenchy wants to better herself and acquire some culture, while Ray loses his spark for life when he can no longer rob banks. Enter debonair Hugh Grant in the William Holden role. This latter half is filled with mostly predictable gags, although the ostentatiously vulgar set décor is a sight to behold. (Also a sight to behold, and probably worth the price of admission alone, is the image of Woody Allen in the cutoffs he wears in the film's opening scenes.) The film's performances are all good, and it's delightful to see May on the screen again playing the type of character she does best. Allen obviously wasn't trying to create anything other than a frothy little comedy here, but it must be said that Small Time Crooks plays more like small-time comedy. 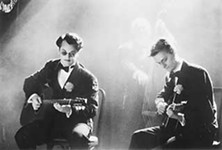