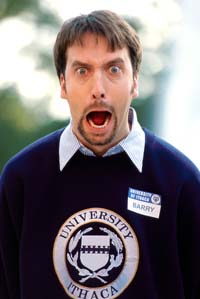 Teen sex farce meets teen gross-out comedy, which I suppose makes this a sexy movie for gross teens, or vice versa. All I know is that guys are strongly advised to avoid this on a first date. Road Trip gleefully combines the cruder elements of the Farrelly Brothers films with an almost surreal dose of testosterone; it's an film with a serious case of arrested development. That can be a wonderful thing, of course, but Road Trip is a meandering journey if ever there was one, by turns explosively juvenile and sporadically funny. Phillips, who directed the controversial HBO documentary Frat House, is more National Lampoon than Harvard Lampoon when it comes to comedy; the baser the gag, the more he milks it, and so we have plenty of shots of old men with Viagrated protuberances, stoner humor, and plenty of shots of topless girls (a facet up to now missing from the current groundswell of teen comedies). And then there's the presence of MTV icon Tom Green, who's either one of the most talented comedians since Andy Kaufman or utterly insane (or perhaps both). Green has only a supporting role in the film, but his gaunt, chinless face hangs over the proceedings like some awful Cheshire Cat from comaville. Personally, I think Green's annoyingly pre-adolescent sense of humor is a fresh take on a stale genre, but I've met others who are positively repulsed by his heavy-lidded stare and fishy mouth. With Road Trip, what you see is what you get. Meyer plays Josh, an all-around nice guy and student at Ithaca University in upstate New York, who, as Green's narrator Barry informs us, has been seeing girlfriend Tiffany (Blanchard) -- currently attending the University of Austin, Texas -- since they were little kids. Through a convenient misunderstanding, Josh fears that his true love has been cheating on him and decides to do a little cheating of his own with sexy co-ed Beth (Smart), unwisely videotaping the affair along the way. As luck would have it, the wrong tape is sent to the wrong girl and Josh, along with studbuddy E.L. (Scott), hopeless nerd Kyle (Squalls), and doper Ruben (Costanzo), embark on a cross-country trip to Austin to retrieve the offending tape before Tiffany can get to it. “Is it funny?” is ostensibly the only important question about Road Trip, and the answer is a tentative yes. The humor here is at times a full two notches below the Farrelly Brothers gross-out gag-reflex level, but it's also wildly inconsistent, and often poorly timed to boot. There's also a nasty little undercurrent of cynicism that runs throughout giving the proceedings a darker, sharper edge. Meyer (Dancer Texas, Pop. 81; Go) is a terrific actor when he's on -- Road Trip doesn't give him that much to work with apart from overwhelming desperation and flustered panic. The scenes of Green manhandling a mouse and, later, making out with a tour-guide mom are creepy highlights in what is otherwise a willfully strange movie, and one that tries just a little too hard to be the first teen-sex farce of the new millennium.