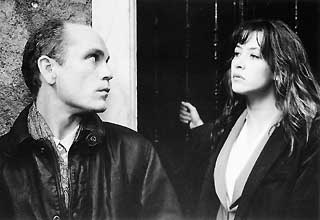 Italian film director Michelangelo Antonioni has always been haunted by unseen realities. Essential though they are, images are little more than hazy signposts that obscure the fundamental realities that lie below them, and our eyesight is not always trustworthy or keen enough to see life's hidden realities and mysteries. Thus, it is little surprise that this most recent movie is titled Beyond the Clouds. Made in 1995 when the director was 83 years old and practically mute from a stroke he had suffered 10 years before, Beyond the Clouds is a magnificent coda to a career spent excavating images and probing the silences that exist between people. On the basis of internationally successful films such as L'Avventura, Red Desert, and Blowup, Antonioni became a well-known staple of the burgeoning arthouse film movement of the Sixties. His films, which all offer stunning visual depictions of psychological anomie and characters adrift in the modern technological morass, are not for everyone -- and neither is Beyond the Clouds. But it should be mandatory viewing for anyone who has ever in the past been mesmerized by the articulate beauty of his images. The film consists of four stories adapted for the screen by Antonioni from his book That Bowling Alley on the Tiber. The stories are connected by a wraparound device about The Director (Malkovich), who is searching various locales for story ideas. (These wraparound sequences were filmed by Wim Wenders, who is also listed as executive producer. In order to obtain the customary insurance bond, the 83-year-old stroke victim had to have a secondary director ready to film at any time.) The first story is about a man and a woman whose love is not consummated in favor of retaining the images of perfection that reality could never match. The second story involves The Director's night of love with an acquitted murderess, a love that would not withstand close scrutiny. Next is the story of a married man and his three-year sexual infatuation with a younger woman and the effects this has on his wife. Last is a story of love unrequited. In a little vignette before the last story, Jeanne Moreau and Marcello Mastroianni reunite onscreen for a touching interlude. Although the stories all thoughtfully pursue Antonioni's ongoing themes, there is also the sense here that they are a bit out of touch with the times. There is an overdependence on the presentation of the nude female image, one that seems, in this day and time, more gratuitous than evocative of life's mysteries. Yet such missteps are minor complaints in the presence of this bold Italian explorer, who sets out to discover the realities that nobody sees. 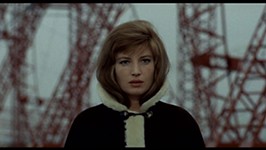 Red Desert
Antonioni's first film in color uses the element to externalize interior feelings. The film is set in industrial northern Italy, and stars beautiful Monica Vitti as a dysfunctional woman suffering from anomie. But is it the woman or her environment that's really out of whack?