Adapted from William Faulkner’s novel Pylon, The Tarnished Angels is one of Sirk’s few movies with a high-art source. Filmed in black-and-white and CinemaScope, the movie is about flyers and barnstorming airplane culture. Says one of Sirk’s biggest fans, Rainer Werner Fassbinder: “Sirk looks at these corpses with such tenderness and radiance that we start to think that something must be at fault if these people are so screwed up and, nevertheless, so nice. The fault lies with fear and loneliness. I have rarely felt fear and loneliness so much as in this film.” 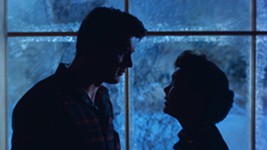 Magnificent Obsession
In this remake of John Stahl’s 1935 film, Hudson plays a drunken playboy who mends his ways and becomes a surgeon in order to repair ...