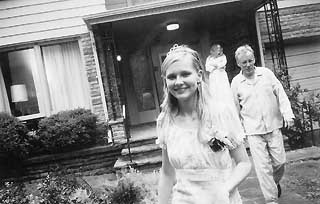 Young Cecilia Lisbon, her old eyes staring vacantly from a face still puffy with baby fat, lies on a hospital bed, the gashes in her wrists newly sutured. “What are you doing here, honey?” the doctor asks her. “You're not even old enough to know how bad life gets.” To which Cecilia flatly responds, “Obviously, doctor, you've never been a 13-year-old girl.” At the root of this shimmering, confident debut from director Sofia Coppola is a profound sympathy for what it means to be an adolescent - the unspeakable pain and forbidden lust, the mystery and morbidity of it all. The Virgin Suicides follows a year in the short lives of the blond, toothsome, and impossibly complicated Lisbon sisters --Cecilia, the youngest, is followed by Lux, then Bonnie, Mary, and the eldest Therese (I'm not giving away anything to say that their lives end sadly; much like American Beauty, their fate is sealed at the film's outset). In their cozy 1970s Michigan suburb, the Lisbon girls live under what must feel like the suffocating supervision of their flighty science-teacher father (Woods) and their strict mother (Turner, who gained weight for the role), a severe woman whose dimples and occasionally bright eyes whisper of the great beauty buried under all the frump. Like the Jeffrey Eugenides novel from which Coppola faithfully adapted the film, The Virgin Suicides is narrated collectively by a group of men (given voice by Giovanni Ribisi) who remain, 25 years later, consumed by the petal-pink memories of the Lisbon sisters and haunted by the sadness that they could not penetrate. Collecting mementos and overheard snippets of conversation, the boys create a shrine to the girls, who have become a seamless combination of fantasy, mystery, and magic. And we can understand why. Kirsten Dunst is perfectly cast as the tempestuous Lux, smacking her gum, her youthful body oozing sexuality that can't be contained by any school uniform. In occasional dream sequences shot like a Seventies shampoo commercial, cinematographer Edward Lachman photographs her bathed in golden rays of light, tossing her sparkling hair about, playing little Lolita for the camera. Her sly, sexual confidence is shaken, however, when she falls for Trip Fontaine (Hartnett), the class heartthrob. When the Lisbon sisters sink into a collective depression, the neighborhood boys watch through averted gazes and telescopes; they fret about how to help them but they lack the facilities to explain the depth of their sympathy and love. In one of the film's most touching scenes they play over the phone some of their favorite songs, whose shamelessly gushy lyrics articulate what the boys want so badly to share: that they feel lonely too sometimes. Coppola's film is darkly comic at times, but it is never ironic about the music of the Seventies or the feelings of the teenagers whose stories are being told. In an astonishingly assured film debut, Coppola captures the poetry and sweetness of Eugenides' novel without allowing any of the standard rites of passage – first dates, high-school dances – to feel trite. The film unspools with such a rich and peculiar unpredictability that it feels as though we are seeing – or dreaming – these things for the first time.