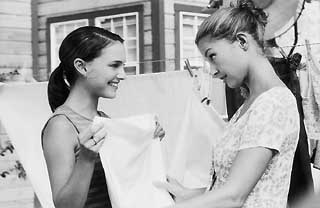 Where the Heart is

The writing team of Lowell Ganz and Babaloo Mandel is responsible for some of the best comedic dramas of the past 20 years (Parenthood, City Slickers) as well as individually having a hand in some of the most popular television series (The Odd Couple, Happy Days), though you'd never suspect it to watch this tedious exercise in emotional manipulation. Based on Billie Letts' bestselling novel, Where the Heart Is rockets the schmaltz to levels even George Bailey would doubtless find cumbersome; it's the filmic equivalent of a mental high colonic, intently flushing all those negative thoughts out of your head and leaving you stuck with a noggin full of cobwebs and small-town platitudes. The fact that the film opens with Novalee Nation (Portman) as a young unwed mother literally living inside a Wal-Mart is a sure sign that shoddy merchandise is on the way. That bastion of middle-American consumer conservatism achieves almost mythic status in the film -- when Novalee is forced to give birth to her child in the sporting-goods aisle, she becomes a totem of unwed mamas everywhere, though it's hard to see the point. Bargain prices on Asian sweatshop-manufactured tennis clogs just don't have the can-do spirit the film ought to be going after. Novalee, whose mullet-sporting boyfriend Willy Jack (Bruno) has left her for greener and less pregnant pastures, is at first just happy to know that her baby is safe and the hospital in this small Oklahoma town she's fallen into (the film was shot in and around Austin). Quickly, though, as in the manner of all cinematic small towns, she's clutched to the bosom of her new home and is taken in by Channing's amusingly rough-around-the-edges Sister Husband, a recovering alcoholic who fornicates daily and then apologizes to the Lord as quickly as possible before moving onto some more pleasures of the flesh. There's also Novalee's new best friend Lexie (Judd), a nurse at the hospital where Novalee spends time after the birth of daughter Americus. Guided by these and a raft of other helpful small-town souls -- mildly eccentric town librarian Forney (Frain), Wal-Mart wedding photographer Moses Whitecotton (David) -- Novalee finds her station in life and, presumably, where the cardiovascular system is. The film is Williams' debut feature, and his television roots (The Cosby Show, A Different World) show through around the edges. His direction is smart and crisp most of the time (his feel for the dusty-hot Oklahoma spread rings true) but the gooey treacle of the script lays him low every time. When a tornado comes to wreak havoc on Sister Husband's lovely house, Williams tears a page from Twister instead of The Wizard of Oz and the effect is appalling and out of joint. Portman, who seems to be making a second career out of characters who tote talismanic shrubberies around with them (as in The Professional) has a sweet, winsome smile -- she's much more likable here than as The Phantom Menace's Kabuki-ized Queen Amadala -- and uses it to melt hearts like sticky summer chocolates. The film that surrounds that charming grin, however, carries the rank stink of hokum, and nasty hokum to boot (throughout the film, death and suffering surround Novalee, tag-teaming her and engulfing her friends). Home may be where the heart is, but I kept wishing this poor silly girl would up and move. 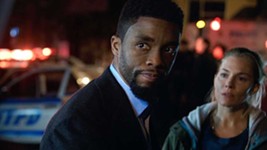