Breathtakingly gorgeous but ultimately thematically unsatisfying, this Indian film is a resolutely non-Bollywood take on the creation of a suicide bomber, a conceit obviously inspired by the assassination of Indian prime minister Rajiv Ghandi. The film burns with a tense, bloody power -- there's no denying this is one of the most visually stirring films to come out of the massive Indian film community in years, but the interplay of the beauty and terror clash perhaps too often and leave the viewer wondering why (this is possibly the film's point, though it seems muddled, the tension diluted). John Malkovich, who has been trumpeting the film's praises since he first saw it at a screening during the 1998 Cairo International Film Festival, has come on board as a sort of post-facto executive producer (The Terrorist's titles read “John Malkovich Presents”). It's clear from Malkovich's lengthy article in The New York Times a few months back that he considers the film to be a masterpiece (he says as much), and to a degree it is. Shot in 15 days, with natural lighting, on a budget of $50,000, and using a variety of non-actors, the film is a marvel to behold (at least visually). The story centers around Malli (Dharkar), a young Sri Lankan woman who, brutalized by the turmoil within herself and her country, jumps at the chance to offer herself up as a suicide assassin when the call comes. She's eager to aid the revolution in any way she can -- you can read it in the stony set of her face, framed by the lank hair that falls from her brow and the full lips that smile not at all -- even if it means giving up her life. Set up in a small village outside the rendezvous point for her moment of destiny, she boards with the local eccentric (Vardhan), a man who has lost not only his son to the conflict but also his wife, who lies comatose on a bed in their tiny home, a forgotten victim of a war few outsiders can understand. In between bouts of training with faux plastic explosives and tending the garden with her host and his naif companion, she wanders the grounds and mentally prepares for her noble sacrifice. Flashbacks to a time of training open up the resolute mindset of the terrorist to us (“If you were a man, I'd marry you,” she tells Malli), but when a crisis of sorts arises in the second act, you can't help but know the film's resolution then and there. Sivan's direction is flawless, however, capturing the lush death of the jungle and the primitive-by-our-standards beauty of rural Sri Lanka (the film was actually shot in India). The problem lies not with Sivan or Dhakar (she's in almost every frame, a definite, haunting plus), but with the film's occasional melodramatics. Scenes in which the tortured Malli fawns over an abandoned bird's nest may hold poetic grace to some, but they struck me as a bit overwrought. Still, The Terrorist seethes with a kind of sorrowful, dark beauty. It's all of a piece, grim and unflinching, and it embraces the terrible zealotry of its characters without sacrificing the more mundane aspects of the revolution. 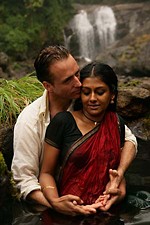 Before the Rains
This story about life and love in southern India during the twilight of British rule is exquisitely photographed but emotionally overwrought.