To bomb or not to bomb? That's the loaded question in Lurie's feature debut, and considering the state of world affairs these days, not an unjust one. Set in the near future of 2008, Deterrence posits a strikingly familiar situation, that of the Iraqis invading Kuwait, this time led by Saddam Hussein's battle-hungry offspring, who has overrun the region's American and U.N. peacekeeping troops. Sitting U.S. President Walter Emerson (Pollack) is facing battles of his own, having entered the presidency through the vice presidential back door when his superior passed away. Considered in the press to be somewhat below his current office, Emerson is eager to prove himself, and so when the crisis arises, he immediately goes on the airwaves, addresses the American people, and demands that Iraq withdraw its troops or face the destruction of Baghdad via nuclear means. The catch is that President Emerson isn't acting from the traditional chair of power within the Oval Office but is instead in the tiny Colorado town of Aztec, stranded in a greasy spoon by a blizzard with only his aides, his Secret Service contingent, a network documentarian, and the diner's sparse patrons as his audience. As hooks go, that's a pretty terrific one, allowing as it does for a microcosm of the American public to act out their varied reactions to this news of an impending WWIII in an almost stage-like setting. What Deterrence most resembles, though, is one of Rod Serling's mid-Sixties Twilight Zone teleplays, with all of that format's advantages and, more noticeably, drawbacks. Most people forget that Serling was a master of the one- and three-act forms long before he was given his shot at weekly superstardom via the Zone; by 1961, he had already won several Emmys for work on such non-fantastic fare as Patterns and Requiem for a Heavyweight. Lurie's no Serling, though, and this isn't Lux Playhouse Theater, either. Deterrence begins promisingly enough (the credit sequence acts as a refresher course in the politcs of détente, should anyone have forgotten the rules in the wake of the fall of the Soviets), with Pollack, the first Jewish President, called upon to make a literally earth-shattering decision regarding the resolutely anti-Semitic Iraqi government. And when the President admits that he may be acting President but he's no practicing Jew, the scales tip even further to the absurd. Deterrence wants very badly to be a Cold War nail-biter along the lines of the recently redone Fail-Safe, but it just doesn't have the right stuff. Lurie's camerawork is clumsy and overdramatic, and Pollack, try as he might, never acheives much credibility in his role. When the Iraqi ambassador, by satellite link-up, tells him, "We've got the oil," Emerson cooly replies, "I've got the match." These days, only Arnold Schwarzenegger can get away with throwaway quips like that one, and it's all you can do not to giggle at the absurdity of Pollack's misplaced machismo. Well-intentioned but hardly well-executed, Deterrence may yet spark a few post-movie, cappuccino-fueled debates, but it's hardly the refried Cold War piece it longs to be. 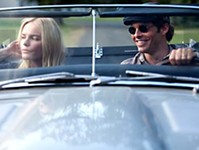 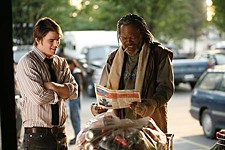