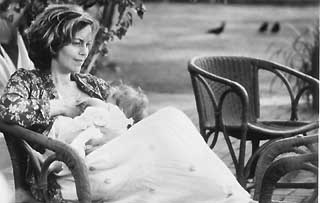 Like a premium Courvoisier label slapped on a 40 of Olde English 800, Cotton Mary's tastefully burnished Merchant-Ivory packaging adds a patina of class without really improving the contents' prosaic flavor. From the first scene, that familiar stately, umberish radiance fills the screen with the M-I promise of aesthetic refinement through well-crafted middlebrow entertainment. But as director Merchant -- normally the team's producing half -- unfolds his soap opera-ish tale of class conflict and resentment in the post-Colonial India of the early 1950s, it becomes all too clear that what we're watching is, all pretenses aside, nothing but tarted-up melodrama. At the center of the story is a half-Indian, half-English woman named Cotton Mary (Jaffrey). Mary's name refers to her preference for English cotton over the locally produced stuff, a clue to her obsessive desire to be identified with the former colonial masters. When fate offers her a chance to work in an English household, she pounces on the break with a ferocity that many of her friends from the old neighborhood find more than a bit unseemly. Once in the saddle, Mary cannily ingratiates herself to the neurotic, weak-willed lady of the household (Scacchi) by securing a hard-to-find wet nurse for her frail newborn baby. Meanwhile, she consolidates her power around the house by undermining the authority of the family's longtime servant (Raj). All that's left from this point on is watching Mary's petty empire slowly disintegrate in a tacky procession of lying, insanity, sexual hanky panky, and overbearing symbolism. Jaffrey, known to foodies as the author of several bestselling Indian cookbooks, is literally painful to watch as the needy, self-loathing lead character. This, I suppose, can be taken as a compliment. But surely more could have been accomplished here than heavy-handed validation of all our pre-existing convictions about the evils of racism, colonialism, and class-consciousness. At the very least, some of the moral stakes and dramatic fallout could have transcended the mundane, oh-the-humanity tawdriness of a pre-enlightenment Oprah show. Thwarted desire is, indeed, a tragic theme with tremendous power, as anyone who's ever snuffled and snorted their way through Imitation of Life or Splendor in the Grass can attest. Yet the trick of distilling real tragedy from the sour broth of frustration in which much of the human race is stewing on a daily basis is a new challenge every time out. And no matter how many times you get the formula right, there's always a chance to screw up if you fail to respect the subtleties of the art.