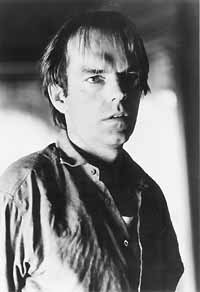 Imagine a scene from a special Franz Kafka-produced episode of Cops. A tired, haggard-looking man (Eddie Fleming, played by Hugo Weaving) snoozes alone in a dismal bachelor apartment filled with stacks of yellowing newspapers. Suddenly the door crashes down and the gendarmes explode into the room, bellowing threats and waving pistols. The poor schmo is summarily hauled downtown, flung into a dungeonlike interrogation room and grilled repeatedly about an absurdly petty crime with not a speck of evidence to support the detectives' smug, bullying accusations. Hints surface of a larger agenda on the questioners' part, but they're maddeningly vague, like lines from bad existential theatre. Yet the narrative's straightforward focus on mundane specifics of evidence and circumstance seem incompatible with any highbrow intentions. What gives? Gripping, stylish, unrelentingly original filmmaking, for starters. Referencing the great literary/cinematic story tradition of psychological crime drama (Crime and Punishment; The Trial; The Wrong Man), Australian director Monahan plays off our expectations for stories of this type to create a movie guaranteed not to be redundant with anything else you'll see this year. As with most films built to endure, The Interview pushes viewers' pleasure buttons on multiple levels. The plainspoken but richly suggestive script plumbs deeply into the complex relationship between interrogator and the interrogated. Not merely dialogues aimed at uncovering legal or cosmic truth, the prolonged “interviews” that constitute most of the film are also moral power struggles, shot through with high deception and subliminal gamesmanship, aimed at settling the central issue of who has the right to judge whom. At straight-up face value, though, this film also evolves into a terrific classical yarn of crime and detection. The lead “interviewer” is Sgt. John Steele (Martin), a hard, even brutal man whose excesses are tolerated because he “gets results.” He's also, we suspect, given extra latitude because of his icy moral fervor and unexpected bursts of rough eloquence. In terms of subtlety Steele can't hold a candle to Harvey Keitel's Detective Netusil in Bad Timing. But like Netusil, he succeeds because of an eerie instinct for getting inside suspects' souls and exploiting their fears, vanities, and insecurities. His opponent, Fleming, is initially cast as an unambiguous innocent, the victim of a nightmarish travesty of justice. But at a very distinct moment, a dark gleam enters his eyes and he starts giving as good as he gets with Steele. Is Fleming simply learning to stand up for himself, or is there more to him than we've been led to believe? The ambiguities quickly deepen and multiply, with enough perverse plot kinks to make The Usual Suspects look like an episode of Dragnet. Weaving, who delivered one of the Nineties' best performances in Jocelyn Moorehouse's underrated gem, Proof, is even more remarkable here, redefining his character repeatedly as the story develops. Martin is almost his equal, creating an oddly touching portrait of a hard man with haunted, searching eyes, for whom the process of interrogation appears to be not just hard work but a massive sacrifice of life force. These performances in themselves are enough to commend The Interview to your attention. But when you add Monahan's stylish direction and an unostentatiously brilliant script that manages to be dark, devious, funny, insightful, and endlessly thought-provoking all at once, you have something approaching a complete nutritional unit for gourmands of off-the-beaten path cinema. 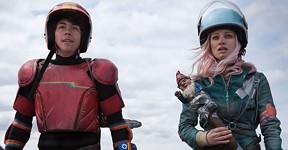