Days after seeing Show Me Love (in Swedish, with English subtitles), my maxillary muscles are still smarting from grinning so much at this almost unbearably sweet and spot-on dissection of a Swedish teenager's first love. The fact that the teen in question -- the lovely Alexandra Dahlstrom's shy misfit Agnes -- is a lesbian is almost beside the point. When she falls for the cliquish blond bombshell Elin (Liljeberg) and begins scribbling her unrequited's name all over her junior-high textbooks, it's too close to home to remain unaffected; the film draws you in by virtue of the familiar. Who didn't spend their early-to-mid teens, before the heartaches set in, covering reams of homeroom handouts with doodled proclamations of love? Well, okay, not me, but I know some of you are out there. I saw you doing it while trying to glean your geometry answers, so who are you trying to kid? Show Me Love is remarkable on several counts, not the least being that it's director Moodysson's first feature, which went on to beat out Titanic as the real ship of dreams at Northern European box offices. And no wonder -- the film operates from a similar (although better-realized) youthful standpoint, the all-or-nothing emotional idealism that propelled Jack and Rose's doomed love affair is here on a lesser scale, although Moodysson, with the help of an invigoratingly excellent cast, never badgers viewers' emotions with trite musical cues or blatant, lovestruck sermonizing. Agnes, the intellectual 14-year-old who has pictures of Morrissey and Baz Luhrmann's Romeo + Juliet dotting her bedroom walls, is a quietly frazzled teen, achingly real. When the object of her affections kisses her following a disastrous non-event of a birthday party, it's all she can do not to slump to the floor in ecstatic bliss. And as in the real world, the shock of this new wonder is too quickly revealed to be nothing more than a cheap teenage dare. But Moodysson leavens the outrage with a revelation: That was no one-sided smooch, and Elin the pursued is now Elin the pursuer, of a sort. Show Me Love is so full of good stuff that it's impossible not to fall in love with it. The recurrent theme of teenage emotional waffling -- she wants me, she wants me not -- is done with the utmost sincerity; you can almost hear the subtle quickening of heartbeats as Agnes and Elin perform one of the most shy and lovestruck pas de deux in screen history, a flurry of feints and dodges, recriminations and resolutions. Liljeberg is a miracle. Her face is so eminently readable, watchable, invitingly hesitant that it defies description, and Dahlstrom is her emotional equal -- two young actresses who invest these characters with so much personality that it almost makes you squirm. Moodysson's film, shot on reversal stock for that grainy, Nordic-teen look and peppered throughout with jaunty pop songs, is just flat-out excellent. It's a breath of fresh air in a genre too often controlled by Hollywood teen-pap, and the song it sings is pure and simple and some kind of wonderful. 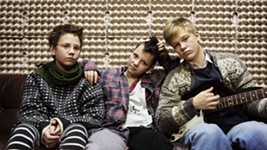 We Are the Best!
Lukas Moodysson gives us a captivating portrait of 13-year-old proto-punk girls in 1982 Sweden.