With a running time of 92 minutes, Whatever It Takes is too long by an hour and a half. Another in a seemingly endless line of teen comedies riffing on the classics (this one tackles, none too gently, Edmund Rostand's Cyrano de Bergerac), Whatever It Takes is drivel of the purest ray serene. The notion of serving up old-school stories with decidedly new-school flava is, you know, da bomb, but I'll hasten to steer clear of forthcoming attempts to update Literature 101. True, I've been waiting for Hollywood to hustle out Kafka's The Metamorphosis (Jay-Z is Gregor Samsa), but until we adequately polish off the remaining works of William Shakespeare and all those other old guys, count me out. Shane West, so credible in Liberty Heights, is cast here in the Cyrano role. As Ryan Woodman, he is the high school dork with the heart of gold, a solid student untouched by the cliques that surround him, except when he's pining for his heart's true desire, the unobtainable Ashley Grant (O'Keefe), a cookie-cutter gamine straight out of central casting by way of Anytown, USA. Why poor Ryan has the hots for one so clearly his lesser is anyone's guess -- the story just throws it off to the vagaries of high school hormones. Ryan is confronted one afternoon by Ashley's young stud cousin Chris (Franco) with the notion of helping each other score with their dream dates -- Chris is after Ryan's platonic gal pal Maggie (Sokoloff). (I had a sudden, unbidden image of that scene in Hitchcock's Strangers on a Train in which Farley Granger and Robert Walker exchange murders. “Criss cross!” indeed.) Rostand's play is only marginally adhered to; Ryan pens poetry he knows Maggie will fall for, and then slips it to Chris, while Chris offers Ryan pointers on the manly art of seduction. Later on, Ryan essays the famous balcony scene, feeding lines to a desperate Chris while concealed in the theatre department's stage dressing. It's all done with an awfully heavy hand, although those unaware of Cyrano may find it marginally amusing. Add to this heady mix a sequence of vomit and flatulence gags, and Rostand is surely spinning in his grave. Hubbard, who directed last year's Trippin', has little if any discernible sense of style. He covers the bases, though, by including enough lightweight teen-friendly pop music to fill out a soundtrack CD … but just barely. Only Sokoloff as the sweet Maggie acquits herself admirably. The character is woefully underwritten -- she's Ryan's platonic buddy, and little more -- but she makes the most of it and steals what little there is to take from the picture. Hardly a recommendation, but who knows? Maybe you can claim to have seen her way back when she was surrounded by a giant sucking sound. 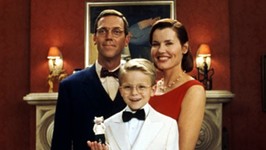