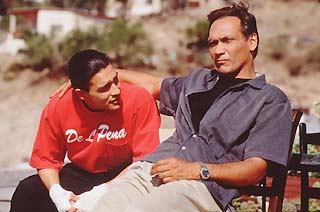 Less talk, more fisticuffs, por favor. The sweet science falls prey to yet another boxing debacle, this one on the screen as opposed to in the ring. For Avila's debut film, he has chosen former boxing journalist Phil Berger to craft the script, which, in retrospect, could have used fewer clichés and more realism. Like a punch-drunk fighter, Price of Glory's storyline keeps threatening to topple to the canvas and lay there, inert and bloody. When it finally does, it comes as no surprise -- the fix was in from scene one, and the film is a TKO before it even had a chance to get off a decent hook. Jimmy Smits plays Arturo Ortega, scion of a Mexican-American, middle-class family composed of his loving wife Rita (del Mar) and his three rambunctious boys. As the film opens, it's the late Seventies, and Arturo, a Golden Gloves boxer, has just hung up his gloves in the name of love. Too many right crosses to the head and Rita knows her future brood might arrive with bruises on their soft spots, so it's no mas ringside for her and her beau. Cut to 10 years later, and Arturo, a stubborn, willful, overly proud father, has enrolled his two older sons in a junior boxing league where they continue to get the stuffing beaten out of them. Older Sonny (Seda) has the talent, as does middle kid Jimmy (Collins), but it's the smallish Johnny (Hernandez) who sticks by his father's fightin' side through thick and thin. As the years fly by, Arturo attempts to groom his boys for the world of professional prize fighting and encounters all manner of problems, from Sonny's decision to get married and perhaps settle down to Jimmy's rebellious attitude and drug use. Only the taciturn Johnny pledges any sort of familial allegiance. Enter unscrupulous boxing promoter Nick Everson (Perlman), a Don-King type with better suits and not as many flyaways, who promises to get the boys their big shot if only Arturo will relinquish his control over their careers. From here on in the film is a battle not of boxing gloves but of wills, as the prideful papa attempts in vain to maneuver his offspring up the slippery slope to the world of the pros, all while neglecting his home life and generally inflicting unnecessary wounds on those closest to him. To call this an old story is a massive understatement: The tale of the washed-up boxer who seeks redemption through his children had whiskers on it in the Thirties, and Avila, who directed the promising Foto-Novelas short series three years ago, is apparently loath to bring anything new to the table apart from the Mexican-American angle. Smits acquits himself admirably, however: In the years since L.A. Law his face and acting style have coarsened. If nothing else, he certainly looks the part of the beaten-down dad. All three of the young actors portraying the Ortega children are fine as well, particularly the thuggish Hernandez. Fine acting can't save the film from its hoary scripting, however, and frankly, even the fight scenes seem over-choreographed and fail to connect. Why the sudden resurgence in boxing films? Your guess is as good as mine, but hopefully the sorry Price of Glory indicates the bottom of the barrel has been reached. (See related interview in this week's Screens section.)