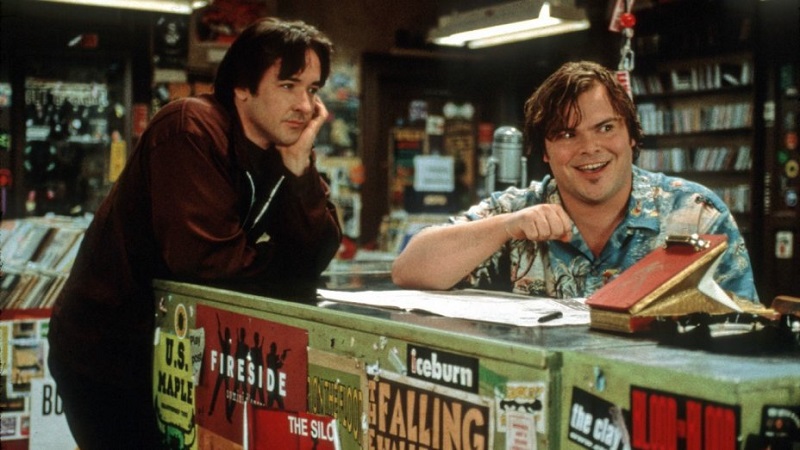 This relatively faithful adaptation of Nick Hornby's beloved music-culture novel is a smart, funny, and youth-savvy relationship film. The film's Chicago locale is its primary deviation from the book, which is set in London. Otherwise, lines of dialogue and the story's interior monologues and lists are transferred from the novel with most of their acerbic wit and music-drenched knowledge intact. Cusack, who co-produced and co-wrote with his Grosse Pointe Blank partners D.V. DeVincentis and Steve Pink (as well as re-teaming with Frears, his director on The Grifters), stars as Rob Gordon, the owner of a none-too-successful record store. Celebration Vinyl is a temple of popular music knowledge and free-ranging tastes, presided over by Rob and his two employees Dick (Louiso) and Barry (Black, aka one half of the music duo Tenacious D). The triumvirate rules its tiny domain with the fervor of unrecognized music czars, subjecting their stock and their customers to the self-anointed infallibility of their own musical tastes. These three underappreciated music connoisseurs are also inveterate list-makers, constantly tossing off hilarious topics for new top-five lists. In addition to providing a source for much of the movie's humor, these lists provide the underpinning of the movie's structure as well. Beginning as Rob's live-in girlfriend (Hjejle) walks out on him, High Fidelity traces the course of Rob's top-five relationships with women, as Rob believes that he will discover the source of all his problems if he figures out why each of these relationships went sour. Rob's search through his past takes the form of a male confessional as he addresses the audience directly in a running commentary on his life and actions. The technique mimics the novel's first-person narrative structure. While Cusack is engaging and believable as the story's self-absorbed narrator, the tactic still leaves the film itching for a stronger sense of plot direction. Rob's observations are insightful and funny, picayune and revealing. Yet, there is a certain slackness that comes with realizing that the only organizing principle is Rob's revisitation of his old relationships. Still, there is something comforting about Cusack's turn as Rob Gordon that seems as if he were playing a continuation of Say Anything's Lloyd Dobler -- only a few years older and a tiny bit wiser. Any possible aversion to the movie's “guy” spirit is precluded by Cusack's engaging appeal to both men and women. A strong cast of supporting players enlivens the story. Girlfriends run the physical and dispositional gamut from Lili Taylor to Catherine Zeta-Jones. Tim Robbins and Joan Cusack are on hand for particularly distinctive comic turns. As Rob's employees, Louiso and Black contribute to the film's authenticity, playing their roles as encyclopedic music geeks and feisty best friends with telling verve and body language. Black, in particular, delivers a full-throttle comic performance that should bring him to the attention of casting directors who have heretofore relegated him mostly to bland background roles. Bruce Springsteen also appears in a surprise cameo. The movie's realism is also aided by its use of Chicago as an authentic backdrop and the rich detail in the production design of the record store and surrounding music scene. The direction by Frears is solid though unshowy, allowing the focus of the movie to reside in its wonderful characters and atmosphere.