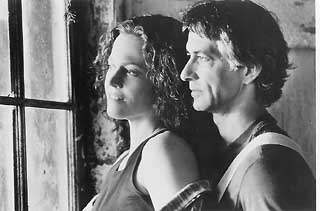 A Map of the World

Of all our exalted moral virtues, truth may be the most problematical. Why? Well, for starters the unvarnished truth is often damned hard to reconcile with the sheer, mindless will to live that keeps us plugging away in the face of total certainty that it's all going to end badly. Furthermore, as this unpredictable, oddly absorbing film reminds us, absolute honesty is mutually exclusive with many other cherished human traits, including tenderness, compassion, and filial love. Our example here is Alice Goodwin (Weaver), a school nurse in a small country town where she and husband Howard (Strathairn) have moved to pursue his dream of being a dairy farmer. Alice is a poor fit in the community, but not because of any big-city airs she's copping for the locals. Actually, you get the sense that her remote, somewhat prickly personality would make her a bit of an outsider in any context. She responds to most situations -- even her own emotional responses to Howard and her two young daughters -- with the detached sensibility of a literary editor. Alice doesn't so much live her life as annotate it with a ruthless honesty that wounds and confuses people who are unaccustomed to such open expression of “unacceptable” feelings most of us suppress by mutual assent. These quirks become (literally) points of indictment when a student's mom (Sevigny) accuses her of sexually molesting her son. On the heels of another, unrelated calamity that has recently happened on Alice's watch, the town's distrust for her crystallizes into a full-blown witch hunt. Jailed, accused of horrible crimes, and increasingly estranged from family and friends who are dismayed by her refusal to wholeheartedly play the role of wronged innocent, she seems at times to hover above the fray, recognizing no moral authority above her own conscience and intellect. To convey this radically internalized drama onscreen is an ultimate screenwriter's challenge. Much credit is due to Polly Platt and Peter Hedges for their work in transferring intact the guts and integrity of Jane Hamilton's source novel. But it's the astonishing performance by Weaver that really keeps us locked into a rather messily arranged narrative. While the story's basic structure zig-zags between tragedy and melodrama, Weaver's preternaturally resilient and self-possessed character just keeps shoving the victim's mantle right back in our faces. So dominant is her character that the supporting actors, including Moore in a complex, deeply affecting performance as Alice's best friend, Theresa, are basically playing off of her, not the storyline. There's plenty of suspense here, but not so much in the mundane plot point of whether or not Alice will get off the hook. Rather, the outcome we're all hanging on tenterhooks to see, is whether the belief systems of a strange, resolutely uningratiating middle-aged woman will prevail. All this is so contrary to standard movie logic, that I can honestly describe A Map of the World both as one of the truest-seeming movies I've seen in some time and as one of the most odd and haunting. The only way to resolve that apparent conflict is to take an honest look at the strange, secret darkness inside. And any art that can inspire that response deserves our deepest respect.

A Monster Calls
A beast helps a boy through tough times