Among the worst-damaged during wartime are a battle zone's children. Cut loose from school, nurtured by antagonisms, and seasoned by deprivation, these kids come of age under warped and difficult conditions and will no doubt bear the lifelong scars of their interrupted educations and thwarted childhoods. To come of age in Beirut during the recent war-torn decades of maddeningly convoluted civil strife, seems a challenge destined to stymie even the most stabile of teenagers. Thus Ziad Doueiri's 1998 film, West Beirut, comes as a flash of insight, his semi-autobiographical story serving as a window on what it was like to grow up in Beirut during the mid-Seventies. It is also a portrait of the universal condition of teenagehood as well as a street-level portrait of life in Lebanon -- a country that has produced few other film documents in recent years. Like many other first-time film writers and directors, Doueiri focuses his story on the coming of age of a young man not unlike himself. In fact, the movie stars his younger brother in the lead role of Tarek. Tarek and his best pal Omar (Chamas) clown around in school and shoot Super-8 movies in their spare time. Then, in 1975, fighting breaks out and school ceases to exist. Furthermore, the shop that developed their film lies across the border in East Beirut. Gradually, the boys' reckless and self-absorbed adolescence grows into a finer understanding of the ramifications of the madness that surrounds them and their families. A standard teenage love interest becomes complicated because of the girl's Christianity. Bike-riding becomes regulated by the ever-changing lines of the DMZ. Doueiri makes the most of his film's meager resources, shooting in bombed-out streets with nonprofessional teenagers. His experience as an assistant cameraman (From Dusk Till Dawn, and all Tarantino's films) has served him well. The images are clear, direct, and evocative. Part of the universality of his message is that kids will be kids, no matter what hardships they face. West Beirut has its share of teen prurience, hijinks, and bouts with authority figures. Kids, however, can eventually grow up and away; no such laws govern the progression of wars. 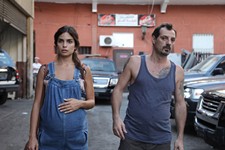 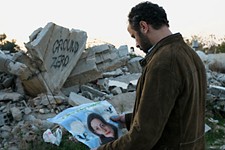