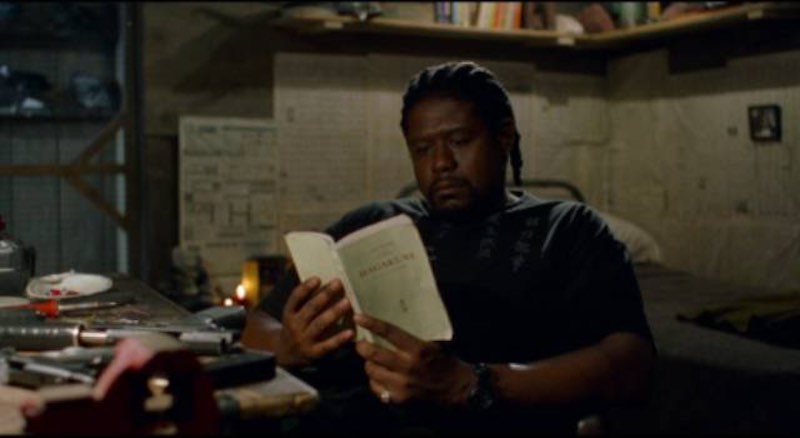 Jim Jarmusch, the king of indie cool, strikes another blow against the empire with this new work about a contemporary hitman nicknamed Ghost Dog (Whitaker), who is steeped in the code of the ancient Japanese samurai. It's a story about collisions and cohesions of cultures and languages, behaviors and customs. It's also a story that makes sense on some ethereal level but not always on the practical plane. It's the kind of movie you wish you had more time to absorb and could see more than once before reviewing. For Jarmusch is like a jazz master of the movie screen, a Charlie Parker of the camera who changes registers, tempos, and tones while never losing sight of his riff. Some chord progressions lead down blind alleys, but others lead to nirvana. Jarmusch is also a supreme shotmaker. His compositions are vivid and rich with possibilities. His images can go from the quietude of Ghost Dog in contemplation to the swiftness of the character's actions in combat. Ghost Dog is about contradictions. This urban warrior who uses some of the top technology of his trade also communicates with his employers via carrier pigeon. He cannot understand a word his best friend says because the man speaks only French, but the two understand each other instinctively. The movie also has big gaps in the narrative that leave out much of the detail that might allow us to understand who Ghost Dog is or why he is the way he is. Ghost Dog is a tone poem and a perfect companion to Jarmusch's recent film Dead Man. Even the titles are similar in the way they combine images of death and animality. Because also there are many recurring images of animals in Ghost Dog. Both movies float along on their own inner logic, assisted by choice contributions from the lead actors, cinematographers, and music composers. Here, Whitaker must be singled out, for it is impossible to imagine Ghost Dog with any actor other than Whitaker at the core, Jarmusch regular Robby Muller contributes his usual stunning work, and The RZA (a founding member of the Wu-Tang Clan) wrote an amazing score that perfectly renders the movie's contradictions in sonic terms. Like the technique of the lap dissolves that Ghost Dog so elegantly uses to portray its man out of time, the viewer may also feel caught in the technique's overlapping embrace. My advice is to not sweat the missing frames and just go with the flow.