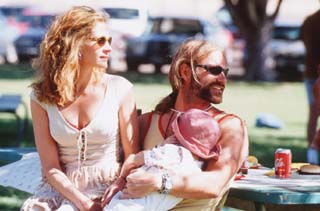 Erin Brockovich may well be Julia Roberts' best film to date, or at least the film that finally puts the lie to critics' assertions that she's less an actress than a leggy, eye-rolling smile with a good agent and a welcome gloss. Certainly, past Roberts projects such as the grim Dying Young, the trifling Runaway Bride, and the woefully miscast Mary Reilly hardly engender the kind of faith you'd like to have in America's No. 1 female box-office draw. (Did Kim Novak have these sort of résumé errata? Well, there was Pepe, and, much later, Massacre at Blood Bath Drive-In, but leading ladies past seem to have saved the worst for last, as a rule.) Not so with Roberts, who, obviously, can get by on her ample charms and solar-flare-of-a-smile when the need arises, and has done so on more than one occasion. She may be America's sweetheart, but I'd like to think that my sweetheart never would have landed herself in I Love Trouble. With Erin Brockovich, however, I've been forced to rethink Roberts, who I'd previously thought of as icing on the tinsel-cake. To be blunt, she absolutely consumes this role, making it her own and turning in one of the best performances of this or any other year. You may not know who this Erin Brockovich character is going in -- though it's based on a true story -- but you'll be hard pressed to forget much of anything about Roberts' performance coming out. It's that good. For the record, Brockovich is a single mother of three, fresh out of job skills and with a dwindling $78 in the bank, who wangles a job as a research assistant with a California lawyer, and then proceeds, through sheer force of willpower and brazen, take-no-prisoners attitude, to unearth the single biggest civil lawsuit in the country's history. We keep hearing that truth is stranger than fiction, but it takes a tale like this one to pound the lesson home. As Brockovich's boss, British actor-cum-crustacean Albert Finney is the soul of curmudgeonly attorneydom, at first at wit's end as to what to do about this vaguely white-trash upstart who has invaded his offices, and later barely able to suppress a chuckle at her bullheaded vitriol. The case -- involving Pacific Gas & Electric and their decades-old inability to keep a lid on their toxic compounds, eventually swells to over 400 litigants, a then-record-breaking number that threatened to level a $38 billion corporate Goliath. Roberts' righteous, expletive-strewn fury is hilarious and compelling to view; she's the ultimate backwoods mama bear, spitting acidic barbs every step of the way. It's quite a performance, and it makes up, thankfully, for most of her past missteps. It's Roberts' film all the way, of course, but a quiet, haunting score by Thomas Newman (sounding a bit too much like his score for American Beauty) and Soderbergh's usual assured (albeit more restrained) direction make this, by far, the most memorable David vs. Goliath courtroom showdown in recent memory, bucking up not only a stalled career but a genre so clichéd that until now it seemed in danger of becoming a parody of itself. In all, a collective sigh of relief is not out of order here.