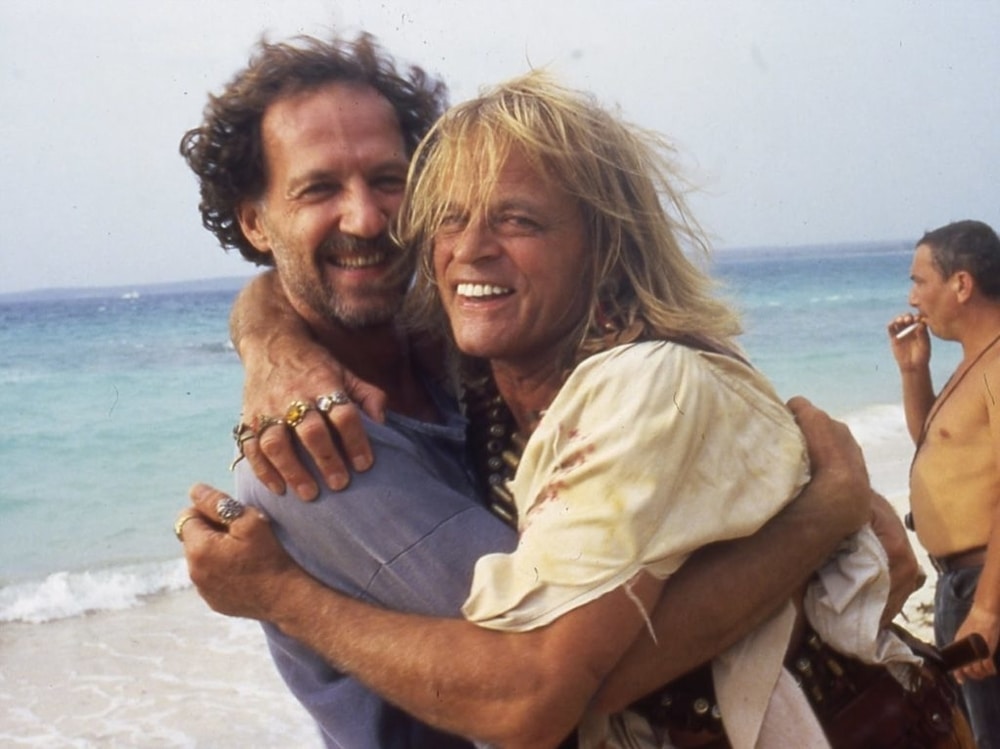 What happens when you put the two alpha males in a cage together? If you're talking about German director Werner Herzog and his longtime “friend” and star Klaus Kinski, the answer is pretty much anything. The pair made five films together -- Aguirre: The Wrath of God, Fitzcarraldo, and Nosferatu are the best remembered of them -- but Kinski's oeuvre includes 150 more made for other directors. It's strange that such a tiny slice of an actor's output would link him forever to one director, but Kinski was always a special case. For one, the man was almost certifiably mad: a manic, raving thing at the best of times. It shows in his face, which carries a perpetually pinched expression, and in his body language, which fairly shouts “stop me if you can.” (No one could.) Of course, Kinski, father of Nastassja, was also a genuinely gifted actor. In the years since his death in 1991, he's become an underground icon of sorts. While his daughter continues along her carefully chosen and fairly steady modeling/acting path, her father has entered the pantheon of film history and taken up residence in a very strange subgenre, that of actor/maniac. Kinski's fits were (and are) legendary: On location in the Amazonian basin to shoot the gloriously epic Fitzcarraldo, he raved about the mosquitoes while simultaneously goading Herzog -- who was Kinski's megalomaniacal equal at times, necessarily -- to further dangerous extremes. The film, a mad dream about rivers and death and opera houses, has Kinski and his team hauling a huge, gaudy, 19th-century riverboat over Peruvian mountaintops and through slashing rapids, to its final doomed locale. The film was insane from the get-go; Herzog admits as much, but felt that location shooting was the only way to capture the essence of the story, and so dragged cast and crew to the Amazon -- placing more than a few of them in mortal peril -- where the film was “shot.” Kinski, predictably, ran amok, screaming, shouting, ever the prima donna, generally making things hideous for everyone involved and, finally, creating one of the most enduringly spectacular films ever made alongside his “best fiend.” The same goes for Aguirre: The Wrath of God, in which Herzog and Kinski traveled to Peru to film the story of the mad (again) rogue conquistador Gonzalo Pizarro, searching for El Dorado, the city of gold. The film is a landmark chunk of cinema, a marvel and a nightmare all in one, rife with compelling, inexplicable images of one man's impudence in the face of overwhelming fate. It's as if Herzog had conscripted the very mountains and jungles to work alongside his star. Kinski, Herzog tells us, hated it all, fearing the insects and the heat and the green lushness of it all, until he was threatened with a gun (here the story varies depending on who -- Kinski or Herzog -- is telling the tale). Herzog's portrait of his friend is as mad as his films, and as fascinating. My Best Fiend paints a picture as rich and vibrant and disturbing as Van Gogh's ear-sliced later works: a haunted and haunting partnership based on a mutually shared passion that echoes to this day. Like a car crash in slo-mo, it's a riveting, beautiful mess.