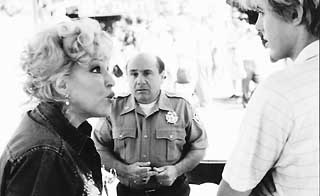 Nobody in the sleepy town of Verplanck, New York, mourns when the town harridan, Mona Dearly (Midler), drives her Yugo into the Hudson and drowns. In fact, police chief Wyatt Rash (DeVito) has a tough time finding any local residents who aren't delighted by Mona's untimely absence. As the chief's second-in-command says, “Ding, dong, the witch is dead.” However, evidence exists that Mona's Yugo had been tampered with and thus, Chief Rash finds himself facing down a town full of homicide suspects. But Verplanck isn't just any old town; it is a town full of idiots, a veritable Al Capp Dogpatch in the lower Hudson Valley. Witness the fact that everyone's car of choice is a Yugo; each Verplanck citizen drives one ever since the company conducted a cheap sales test of the vehicle there some 10 years ago. Ostensibly a great ensemble comedy, Drowning Mona bears more than a passing resemblance to the Agatha Christie whodunit Murder on the Orient Express -- except that in Mona each of the characters is dull and boorish instead of witty and urbane. Although Mona dies during the film's opening moments, Midler's title character is revealed through the story's perpetual flashbacks, during which each character's theoretical motive for wanting to kill Mona is disclosed. As it turns out, none of them would be wholly unjustified -- the woman was truly hateful. And that's the crux of the problem with this comedy: the humor is really nasty and rude. It's a white-trash comedy and it smells about as bad as last week's garbage. Director Gomez burst on the scene a few years back with his edgy urban dramas, Laws of Gravity and illtown. Since then he's directed numerous episodes of Homicide and The Sopranos. Though how he became involved in this particular caper is a mystery larger than the one surrounding who drowned Mona.