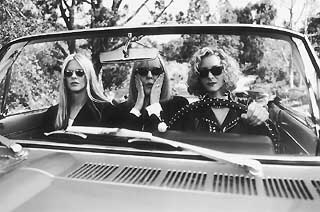 So you young 'uns thought the changing of the generational guard (at least in pop-culture terms) was a done deal; that you'd finally escaped the clammy embrace of lugubrious, self-obsessed baby boomers. Well, think again, mes enfants. Thirtysomething may be a distant memory, and Bruce Springsteen may be increasingly viewed as a footnote in Courteney Cox's career, but to paraphrase the Magnolia mantra: You may be done with boomer angst, but it's not done with you. Hanging Up, like many films you can expect to see in the years to come, deals with the knotty, conflicted emotional relationships among today's middle-agers and their aging parents. Based on a novel by Delia Ephron, who co-wrote the screenplay with sister Nora, it's the story of three sisters (Ryan, Keaton, and Kudrow) whose success-striving lives are disrupted when their 79-year-old father (Matthau) becomes an invalid. Most of the care-providing load falls on the shoulders of youngest daughter Eve (Ryan), whose siblings provide no material support but plenty of second-guessing in the constant cell-phone conversations that seem to comprise half of the action. Eve's situation is all the more thankless because of her curmudgeonly father's failing memory and the staunch refusal of her long-absent mother (Leachman) to get involved. But as is often the case in these situations, Eve's martyrdom also carries power. By judiciously guilt-tripping her absent sisters, she's able to gain a moral leg up on them while enjoying previously unknown depths of bonding with a parent who until now has been an emotionally ambivalent presence in her life. The problem I suspect most viewers will have with this smart, visually appealing film is not so much the rather off-putting spectacle of rich boomers' total discombobulation over a situation as old as humanity itself. Rather, it's the contrived, off-pitch tone of the writing, which is equally unconvincing in its screwball-comedy moments and its strained efforts to invest meaning into the “ironic” situation of family alienation through constant yakking. There's a sense that Keaton wanted to make a considerably darker, harder-edged film than this but lacked the resolve or support to do so. This dilutes the effect of tough, uncompromising scenes (such as the one in which Leachman coldly blows off her family, confessing that, “for me, motherhood just didn't take”) by embedding them in a narrative that otherwise trudges formulaically toward a preordained feel-good ending. For those who still regard any display of jagged-edged emotion by shiksa cutie-pie Ryan as a stretch, her performance will register as a high point. In general, though, it's hard to imagine anyone -- regardless of their expectations for this film -- coming away from Hanging Up with any sense of revelation, soul-enlargement, or even the simple pleasure of a compelling tale well told. But then, with an entire generation of scared-shitless middle-aged filmmakers facing en masse the existential terror of human mortality, there should be plenty of opportunity for getting this story right in the future.

Lady Diane
Diane Keaton takes her life to the stage