Of all the plays Shakespeare penned, few seemed less likely to win the Hollywood treatment than Titus Andronicus. The Bard's most ghoulish work, this saga of revenge in ancient Rome goes way over the top in depicting onstage atrocities, and while it was a big hit for the playwright early in his career -- Elizabethans loved a bit of the old ultra-violence -- more recent audiences have blanched at the glut of stabbings, hangings, throat slittings, and lopping off of assorted limbs lustily served up by young Will. Even accounting for modern American moviegoers' relish for bloodshed in their entertainment, the mayhem in Titus is so disturbingly grotesque that it just didn't have “major motion picture” stamped on it. Yet here it is, in all its gory glory. The reason is Julie Taymor, the gifted theatre director best known for translating Disney's The Lion King from screen to stage. She created a startling theatrical production of Titus in 1995, and given the chance to helm a movie, she opted to transfer that work to film, essentially reversing her most famous trick. The result is a spectacularly imaginative piece of Shakespearean cinema in the vein of Derek Jarman's The Tempest, Peter Greenaway's Prospero's Books, Baz Luhrmann's Romeo + Juliet, and Richard Loncraine's Richard III. As in those films, Taymor's setting is a world out of time, a visually opulent melange of eras in which history is warped to enlarge our grasp of the story -- and to make iambic pentameter coexist comfortably with contemporary attitudes. In Titus' Rome, centurions ride motorcycles, and candidates for Caesar campaign from cars with bullet-proof glass. It's a world of political posturing and might-makes-right that we recognize all too well, and when Titus, an aging warrior weary of the battlefield, runs afoul of the new emperor -- the capricious Saturninus, played by Alan Cumming in a devilish smirk and very heavy eye shadow -- we can smell the same acrid odor of political reprisal that wafts from our houses of government today. That sense of familiarity is what draws us in and holds us there even as events spin horrifically out of control, as Titus kills one of his own sons, as his two other sons are framed for murder, as his daughter is raped and mutilated, as he is gulled into chopping off his own hand, as he concocts a gruesome revenge. We might dismiss it all as ludicrous if not for the grounding in modern sensibilities Taymor provides; that's us up there. Her chief ally in realizing this is Anthony Hopkins, who gives us a Titus of dazzling complexity, in whom we see a disciplined, heroic soldier, a battered and embittered father, a crafty madman. Though he is wise in the ways of war, his blindness to the war on the home front leads him and his family to ruin. The supporting cast is impressive, with Jessica Lange a serpentine Queen of the Goths: sensual and deadly; Laura Fraser a heart-wrenchingly pitiable Lavinia, the daughter who is brutally robbed of her hands and tongue; and Harry J. Lennix, a disturbingly appealing Aaron, the villain who ruthlessly manipulates all and regrets no evil deed. Taymor gives us the overwrought trials of these figures with a compassion that's surprising, given the lurid qualities of the script; the tragedy registers more deeply than maybe it should. She doesn't work such magic on all the play's flaws -- the pace is still erratic, the abrupt shifts in tone still awkward -- and not all of her visionary touches are transcendent -- the hallucinatory montages strain for impact -- but Taymor embraces them and all that is good and bad about Titus in a way that gives this Shakespearean potboiler an unexpected urgency, a wealth of feeling, and, least likely of all, a ray of hope. 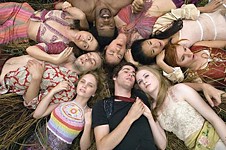 Across the Universe
Julie Taymor takes the timelessness of the Beatles' music and yanks it earthward into a minefield of literalism. 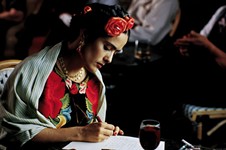